Bob Barr
|
Posted: Apr 24, 2019 12:01 AM
Share   Tweet
The opinions expressed by columnists are their own and do not necessarily represent the views of Townhall.com. 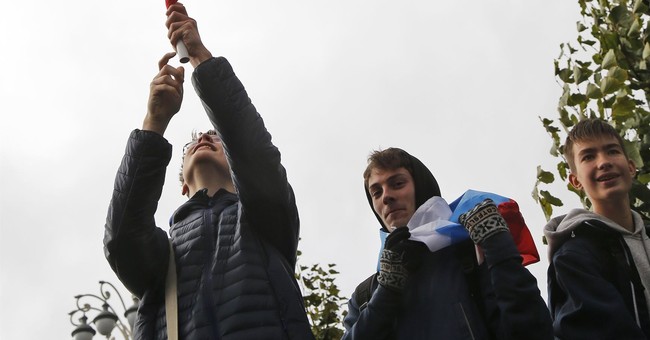 The Cold War years of the 1960s gave rise to two very different cinematic characterizations of spies – the debonair but ruthless James Bond (aka “Agent 007”), and the bumbling but likeable Maxwell Smart (aka “Agent 86”).  Now, half a century later, the federal government has jailed 30-year old Maria Butina as a Russian spy and has asserted that her secretive actions posed a serious threat to our nation’s security.  The reality, however, is that Butina’s activities fit far more easily into an episode of Get Smart than as a serious espionage case.

During her time as both a visitor and a student in the U.S. from 2015 until her arrest and indictment last year, Butina attended numerous political events while maintaining contacts with officials in her home country.  The Department of Justice appropriately has alleged that acting in this manner, Butina violated the Foreign Agents Registration Act (FARA) by failing to register thereunder. She ultimately was pressured into pleading guilty to conspiring to violate that statute.

In spite of being arrested and held in solitary confinement for what essentially constitutes an administrative offense, Butina’s biggest mistake appears to be that her activities and her paperwork omission placed her squarely within the ongoing narrative of Russian collusion.

The Sentencing Memorandum filed last week by the Justice Department, for example, concedes that Butina is neither “a spy in the traditional sense” nor a “trained intelligence officer.” The government instead asserts that Butina conspired to use “connections” developed during her sojourn in the United States to create “backchannel communications” to the Russian government. Characterizing all this as a serious espionage conspiracy, however, is somewhat of a stretch.

The crux of the government’s case surrounds Butina’s attempts to pass “key information about Americans who were in a position to influence United States politics” back to a contact in the Russian government, for “the benefit of the Russian Federation.” In fact, this supposed “key information” amounted to little more than cobbling together lists of known or supposed Trump campaign advisors and other purported policy influencers; and suggesting how they might be persuaded to look favorably on Russia.

As an “influencer,” Butina failed miserably time and again. Promised meetings between her U.S. “contacts” and Russian officials never seemed to materialize, nor did Butina ever gain access to any real insider information. In one noteworthy instance, Butina tried to use the 2017 National Prayer Breakfast to arrange a meeting between Trump and a group of visiting Russian officials.  The meeting never took place of course, because as anyone even vaguely familiar with that event knows, the Prayer Breakfast has never been a forum for political pow-wows; especially between the President of the United States and foreign individuals unknown to him.

The Prayer Breakfast incident is just one of many naïve plans described in the government’s court filings that allegedly were concocted by Butina and designed to ingratiate herself with officials in her home country, and also to secure for herself a paying job.

Despite the government’s effort to present Butina as a formidable foreign agent whose actions harmed our national security, the most it could charge her with is failing to file a form with the Justice Department declaring herself to be an agent for the Russian government.  Consistent with that judgment of Butina as a major player in an international espionage plot, government lawyers have asked the court to impose a two-year jail term; a sentence unusually stiff for what amounts to an administrative filing offense.

It is noteworthy that the crime of failing to file under FARA is not even listed in the federal Sentencing Guidelines -- the compendium of federal criminal offenses designed to guide judges in imposing fair and consistent sentences.

The government asserts that the activities in which Butina engaged –attending various political meetings and rallies (even one attended by then-candidate Trump in 2016) – posed a serious threat to our national security; a threat that would have been avoided if only Butina had registered under FARA.  The argument that our country’s intelligence and counter-intelligence services were in the dark about Maria Butina solely because she failed to file a piece of paper announcing herself is not really one that can be made with a straight face.

The reasons why Butina simply is not deported on the next flight to Moscow lie not so much in the legal arena, as in the political and PR realm.