Disgrace and Irony at Bethune-Cookman

Bob Barr
|
Posted: May 17, 2017 12:01 AM
Share   Tweet
The opinions expressed by columnists are their own and do not necessarily represent the views of Townhall.com. 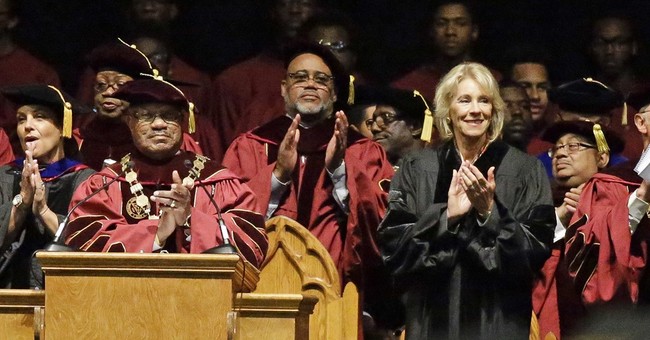 Watching U.S. Education Secretary Betsy DeVos stand at the podium during Bethune-Cookman University’s commencement ceremony last week, struggling to deliver her remarks over the noise of boos and hisses emanating from its graduating class was a sad, but all-too-familiar commentary on the state of higher education in 21st Century America.

The unwillingness of educated adults to respectfully listen to a speaker without demonstrating like spoiled children reflects the cultural shift occurring on college campuses across the nation; one in which shouting down an invited speaker, even a member of the president’s Cabinet, is now viewed as an acceptable – if not noble – means of political protest.

In fact, DeVos may consider herself lucky hostilities escalated only to students turning their backs on her. Other speakers deemed unfit for campus by these self-appointed speech police have endured far worse, as recent events at University of California Berkeley illustrate.

There was nothing controversial about DeVos’ commencement speech. She emphasized the Administration’s support of students from low income families, encouraged the students to continue serving their communities after they graduated, and called on students to counter dissent with the grace and tact of the university’s founder, Mary Jane McLeod Bethune. It was a speech that easily could have been delivered by anybody; but, because it was DeVos delivering it, and not a liberal figurehead who would parrot back to the students their myopic worldview, it was reason enough for their disruptive behavior.

The kneejerk intolerance shown to DeVos, without any provocation or justification, is a hallmark trait of liberal students who protest first, and ask questions later -- if at all. However, what makes the incident at Bethune-Cookman so ironic was that if students had taken even a moment to think for themselves, they may have realized the significance of DeVos’ speaking at a historically black college. Instead of booing, students should have been applauding her.

DeVos has dedicated her life to the school choice movement, helping to give parents more choices in where, and how, their children are educated. Though school choice is derided by Democrats as a way to undercut the public school system, evidence of school choice’s positive impact on minority and low-income communities is clear. Whereas in public school systems where location is the only determining factor in where a child is educated, public charter school systems, like those in Washington D.C., give low-income parents better options than the failing neighborhood school. Studies have shown students at charter schools learn more, have higher graduation rates, and make parents active participants in the education of their children. They also cost less than traditional public schools to educate children. Even the liberal Washington Post endorsed D.C.’s private school voucher program as a “lifeline to low-income and underserved families.”

In short, it is school choice, not the traditional public school system, giving poor and minority students the best shot at going to colleges like Bethune-Cookman.

Of course, this reality is lost on students who would rather ascribe to the rigid dogma of radical leftists, than rely upon their own critical thinking for determining truth. So, rather than acting like educated adults capable of considering an opposing viewpoint, or at the very least respectfully listening to it, “undesirables” like DeVos are summarily rejected when they fall on the wrong side of the partisan dichotomy; in this case, public schooling (good) versus school choice (bad).

Not even rational self-interest for themselves and members of their community was enough to break the spell of this new radical campus orthodoxy. The fact is, to these agitators, it is not really about helping students, but instead a power play for controlling the exchange of thoughts and ideas in order to impose an intellectual homogeneity on campuses. While radicals claim that “trigger warnings,” speech codes, and diversity training are designed to protect students, the hypocritical and childish reaction to DeVos at Bethune-Cookman shows this faux concern for the fraudulent facade it is.

The one bright spot of the day was the reaction of Bethune-Cookman’s administration to the embarrassing conduct of their students. With faculty and administrators standing behind DeVos in a show of support, Bethune-Cookman President Dr. Edison Jackson told graduating students they would be mailed diplomas if the ruckus did not stop. It was, as former Education Secretary Bill Bennett