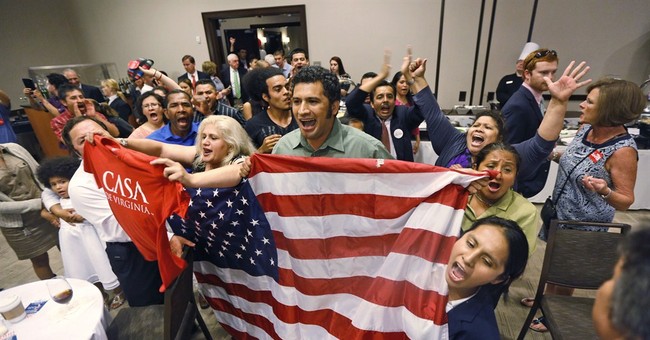 “A seemingly endless surge of immigrants.” That is how the L.A. Times recently described the situation in Texas’ Rio Grande Valley, described by one local government official as “the hottest spot in the nation” for border crossings. The surge of illegal immigrants at the border, largely composed of “unaccompanied alien children” (UACs) from Central America, is creating chaos at the border and turning processing stations and military bases into veritable refugee camps as border officials struggle to handle the surge. And, with the number of UACs expected to climb to more than 90,000 by then end of September, U.S. authorities are quickly losing ground.

However, this chaos at the border is just the beginning of the disastrous consequences stemming from Obama’s whimsical immigration “policies;” a mixture of ignoring current immigration laws, manufacturing new policies based on his “Executive authority,” and blaming Republicans for creating gridlock in Congress forcing him into taking these actions (or lack thereof). And, given that this Administration has yet to approach the negotiating table in good faith with real solutions, it is addressing the crisis in an equally haphazard way, endangering America’s national and economic security in the process.

Were Obama a competent leader, surrounded by competent subordinates, some immediate actions might have included taking all illegals currently in U.S. custody at the border, and shipping them back to Mexico, the country from whose territory they crossed into the United States. Such swift action would have sent an immediate message to others thinking about coming into the U.S. illegally that our borders are, in fact, not open to lawbreakers. Instead, our Homeland Security and Heath and Human Services folks are responding with a “public relations campaign” to tell folks in Mexico it is dangerous to trek through the desert, as if those illegally immigrating were doing so because they did not understand the risks already.

Regrettably, the Administration appears to be following its standard protocol for crisis management: ducking responsibility and blaming the resulting mess on external factors beyond its control; in this case, violence and worsening conditions in Central American countries. Of course, we know not to take this Administration at its word, especially when its public image is at stake in yet another Executive failure. The true catalyst for this surge in illegal immigration stems not from external factors, but is a direct result of the President creating a patchwork immigration enforcement system that has done nothing if not encourage individuals from Mexico and Central America to “come on in.”

For example, frequent grandstanding by Obama and his allies in the Congress about the need to welcome the children of illegal immigrants (“DREAM kids,” in the current liberal jargon) has – not surprisingly – become a clarion call to those south of our border simply to take us up on our offer, and flood our border with UACs. To make matters worse, the Administration has ordered border officials to shelter and process all these illegals, including child members of violent gangs, not because the law dictates they do so, but because Obama has decided this will be a part of America’s immigration policy.

Obama officials like Department of Homeland Security Secretary Jeh Johnson claim the Homeland Security Act of 2002 requires them to act in the “best interest” of the child, which “very often means reuniting that child with the parent in the United States.” However, the law clearly states that the “interests” -- it makes no mention of “best” interests – are only be “considered” in deciding how to care for the children while in U.S. custody. Furthermore, the law defines UACs as those children with “no parent or legal guardian in the United States,” making Johnson’s excuses for the Administration even more absurd.

The Keystone Cop mentality driving Obama’s bush league immigration policies is a well-established hallmark of those who head the many federal agencies under Obama’s control. A less-established characteristic is why, in the face of such obvious dangers to America’s national and economic security, this Administration continues to push such patently ineffectual policies. Is it incompetence, pure and simple, or some crudely disguised liberal master plan to let illegals flood into our homeland, then quickly grant them amnesty in time for the 2016 election? Is it a ploy to create a “crisis” in order to force the Congress to pass his coveted “comprehensive immigration reform” legislation? The latter scenario very well might appeal to a number of Democrats in Congress who face brutal election prospects resulting from the many blunders by a President whose party label they share.

Regardless of the motivations or ultimate agenda behind the failure of protecting our borders, Republicans must act swiftly before our already strained border resources – and those in communities and military installations across the country having to cope with the child immigrants being shipped into their care as a result of Obama’s edicts -- collapse under a new rising tide of illegal immigrants.

Biden done with campaigning for the day at 9:22 a.m.
Hotair
Pres. Trump and the GOP Should Want This Fight Over the Supreme Court — the Nominee Should Set off a Partisan Brawl
Redstate