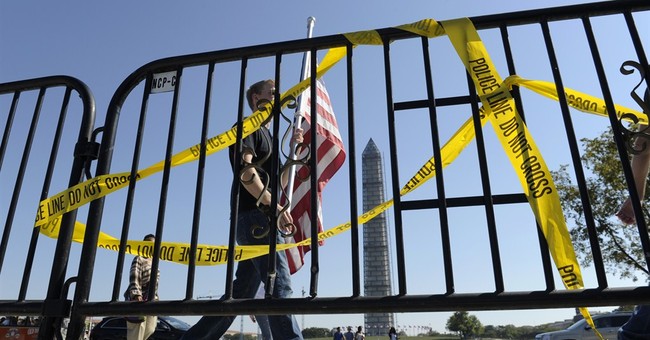 Decades ago, Mike Kelley was fighting a war against communist tyrants in the jungles of Vietnam. Fortunately, Kelley was able to escape that war with his life -- something more than 50,000 other American service members were not able to do. Last weekend, however, Kelley once again found himself side-by-side with hundreds of other veterans, in the newest front in the war for freedom. This time, though, the battle did not take place in thick jungle or dry desert, but on the streets of our nation’s capital.

Kelley, a resident of Grand Lake, Oklahoma, made the trip to Washington, D.C. to take part in the “Million Veteran March,” which was organized to protest the Obama Administration’s decision to close the nation’s historic landmarks, including the many war memorials spread around the City. “I saw WWII veterans not being able to get in their memorial,” Kelley told The Grove Sun. “I got angry and frustrated and said, ‘I'm going.’”

Kelley’s frustration reflects a sentiment growing among millions of Americans, especially veterans, as the government “shutdown” continues – the result of Obama’s refusal to negotiate with members of Congress on budget matters, or on changes to his beloved “ObamaCare.” Over the weekend, even as Kelley and other veterans moved aside barricades placed by the National Park Service designed to keep citizens from visiting the Capital’s open-air memorials, Obama rejected yet another budget deal from House Republicans that would have ended the shutdown.

Obama, however, did find time to order riot police -- armed with steel batons and handcuffs -- to greet the peacefully protesting veterans. It was a scene reflective of the 1930s, when military veterans marched on the nation’s capital to demand wartime bonuses owed to them for their service in the First World War. Obama’s show of force was something not employed even when the hooligans of the “Occupy DC” movement tried to hold the city hostage two years ago – a movement actually praised at the time by Obama and his sidekick, Vice President Joe Biden.

The use of riot police to confront peaceful veterans and Tea Party demonstrators is the latest evidence of the widening gulf between Barack Obama and the American public. As the shutdown now extends into a third week, there is a growing divide between what Obama and his supporters stand for, and what the rest of America believes. It is a disconnect as wide as it is deep; and it portends a troubling future.

Americans clearly want an end to the President’s petty political shenanigans; they want our shared national treasures – owned, after all by the citizenry and not the President -- to be re-opened. Obama overreacted to this understandable frustration by sending in armed police to harass protestors. On Capitol Hill, Republicans tried several attempts to pass limited funding measure to cover important needs, such as paying for military death benefits to families who have lost loved ones in our country’s ongoing military operations. Obama responded by refusing to negotiate with what he termed “extortionists,” and House Minority Leader Pelosi referred to as “saboteurs.”

The simple fact is, it is the Obama Administration that is holding America’s war memorials as hostages; not the citizens.

The frustration that gave rise to last weekend’s confrontations is only a symptom of a much larger problem; and that is, the tension between law-abiding citizens and a government forcing them to accept government-defined health care whether they want it or not. It is the frustration felt by families working hard to pay their bills while food stamp recipients strip a WalMart’s shelves bare in a bizarre spending spree occasioned by a government snafu in its Electronic Benefit Transfer card system. It is a frustration exacerbated by seeing welfare recipients loudly protesting a move by the state of Georgia to charge them $5 a month for cellphones given them for free by Uncle Sam at taxpayer expense. And it is reflected in the growing fear of a federal government monitoring the phone and internet communications of law-abiding citizens with no oversight.

The gulf between Obama's America and Real America is growing. While the rest of the nation suffers because of his refusal to negotiate in good faith with Republicans, Obama seems content to weather the storm from the backdrop of the Oval Office. After all, it is not him or his Washington Team who are suffering; their “let-them-eat-cake” attitude appears unshaken. The battle, meanwhile, for the future of America is no longer smoldering; it is visibly burning.