Mrs. Graham, Can Lindsey Come Out and Play? 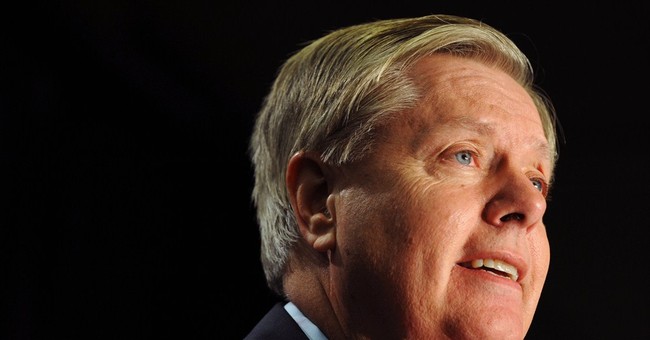 When U.S. Senator Lindsey Graham, upon being interviewed, stated the expanded Obama War Powers Plan would fail if it didn’t offset the bombing being done by President Bashar al-Assad in Syria I became confused. I first thought I might have misunderstood the

The reason for my confusion was that Assad, in addition to bombing the

Since, however, we (meaning the war loving Congress) are on the same side as Assad in the war against radical Islam (there, I said it Mr. President)

Then the light came on as to Senator Graham’s real motives.

Lindsey was born a few years after me and raised, like me, in a small town. More than likely the outdoor games of choice for little Lindsey were much like the ones for me-Kick the Can, Hide ‘n’ Go Seek, Statues, and of course, WAR AND SOLDIERS. Throw in a little Baseball, some Ozzie and Harriet, David and Ricky and you’ve got the flavor of how you were raised in Norman Rockwell

Apparently, when the kids came around to ask “Mrs. Graham, can Lindsey come out and play?” she would ask the kids what they were playing and if the answer was WAR AND SOLDIERS, Lindsey was forced to stay inside and practice the piano.

The game of WAR AND SOLDIERS apparently has been fermenting inside the Senator since those days of yore. Compiling a “distinguished record” of 6 ½ years in the United States Air Force, did not quash his desire to play WAR AND SOLDIERS since his active duty was as a lawyer.

The first Gulf War, being in the Reserves and being called up, might have gotten the blood thirst out of the Senator’s system but unfortunately the Air Force lawyer saw no action, staying stateside, “Where he prepared members for deployment to the Gulf Region”.

Now that the career Senator is finally entrenched on the Committee of Armed Services and Chaired by the no war I didn’t love Arizona Senator, John McCain, it gives Lindsey free reign to finally play the game his mother prevented so long ago.

If he does run for President his slogan really should be

Here I come with guns ablazing

Those other games are for wimps