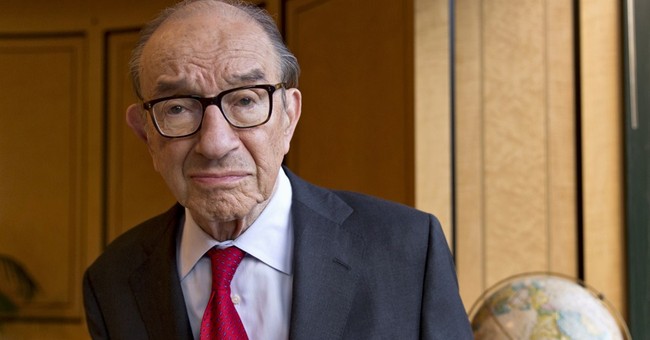 Am I kidding myself, coming to the defense of Alan Greenspan? But apparently if I don’t do it, no one else will. In addition to the hundreds of thousands of dollars earned on the rubber-chicken circuit by the “maestro,” Greenspan also receives royalties from his book publishing forays. Unfortunately, Alan’s most recent book entitled The Map and the Territory has been received with a gigantic yawn. Instead of just dismissing it as a bad try, the New York Times Keynesian shill, Paul Krugman, decided to pile on Greenspan by declaring him as “the worst ex-central banker in the world.” You notice that Krugman is not just referring to the worst ex-U.S. Federal Reserve chairmen; Krugman’s insult includes all former committee members, whether in the United States or any other country. That’s a list of perhaps thousands of people and apparently Greenspan is the worst of the lot. Wow, what a putdown. (Of course, Ben Bernanke cannot be counted in this analysis, since he has yet to achieve the title of “former” Federal Reserve Chief.)

Perhaps Krugman, the Keynesian mouthpiece, is taking the opportunity to belittle Greenspan because Alan once uttered the words “irrational exuberance” regarding the dot-com mania many years ago. That’s as close as any Fed head has ever gotten to calling something a bubble. As a matter of fact, St. Louis Federal Reserve President James Bullard recently said that there are no bubbles of any kind (aren’t you relieved?) Maybe Krugman remembers the “maestro’s” infatuation with the gold standard, and still has a bias against him for Greenspan’s tinkering with thoughts of a monetary return to pre-1933. Yet, despite all of this, and coupled with Greenspan’s declining book sales, Krugman really took it to the extreme by referring to Greenspan as “a bad person.”

Fortunately or unfortunately, I can clearly remember William McChesney Martin, Arthur Burns, and G. William Miller, all former Federal Reserve chairmen, who in my opinion were all real yahoos. So to me, Greenspan wasn’t so bad. (Yet, with Bernanke and now Janet Yellen…well, that’s a whole different story.)

Paul Krugman, economist, blogger, and columnist, who believes that in order to get out of debt, you simply go deeper into debt, is certainly someone who should heed what my grandmother once taught me, “When you point a finger at someone, there are three fingers pointing back at you.” In addition, my grandma also said, “Never trust a man whose upper lip never moves when he talks.”