Political Correctness to the Extreme 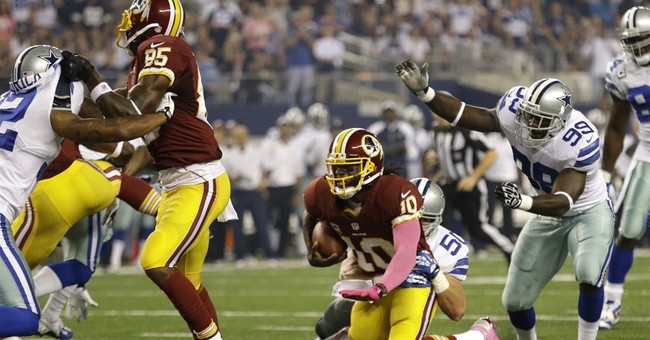 NBC sportscaster Bob Costas recently took to the television airwaves in order to exclaim that the NFL’s Washington Redskins nickname is “an insult” and a “slur.” Mr. Costas, do you really want to go there? Because if you do, let’s go all the way and not just stop with a nickname — lets’ take on logos, mascots, and even traditional actions.

First, a little history is in order. The professional baseball franchise from Cleveland, Ohio first joined the American League in 1901, known at that time as the Cleveland Bluebirds. After the 1914 season, the owner sought a name change. Although some monikers like the “Tribe” and the “Wahoos” have stuck to this very day, the media decided upon the official name “Indians.”

The Washington Redskins football team originated in 1932. They were known at that time as the Boston Braves and shared the same ball field with the Boston Braves baseball team, and because they shared the same name, there was confusion galore between the football and baseball teams. In 1933, both teams moved to Fenway Park. The baseball team then became known as the “Red Sox,” and in order to avoid any confusion with the baseball nickname “Indians,” the football team changed their name to the “Redskins.” The Boston Redskins then promptly moved to Washington, D.C. in 1937.

Okay, how many of you are insulted so far? Since political correctness has definitely run amuck, why don’t we all just get onboard?

The current logo of Major League Baseball’s Cleveland Indians is a smiling Indian with red skin. How insulting. Indians don’t smile. In addition, the team’s mascot is known as “Slider,” whereas you would think the mascot’s name would be “Running Deer” or “Soaring Hawk,” but certainly not “Slider.”

Have you ever attended a Florida State Seminole ball game when the fans start performing their famous “war chant” and “tomahawk chop” to the beat of a tom-tom drum? How degrading. Tom-toms, really?

Why, Bob Costas, should we stop at Native Americans as far as being insulted? How about the NFL’s Dallas Cowboys football team, when their mascot “Rowdy,” with his large bubble-head, runs wildly around the stadium? And did John Wayne really enjoy being called a Cow-boy? Hmmmm.

Now, let’s really take it to the extreme. As a native Western New Yorker, I never really appreciated Syracuse University athletes being designated as the “Orangemen” and “Orangewomen.” How offensive for citrus lovers everywhere. Moreover, what about the Northern Arizona University Lumber-Jacks? What a slight to the “Jills.”

If your heart is true and the term “bigotry” is just a word to you, Bob Costas, then the words “Black-Skin,” “Yellow-Skin,” “Tan-Skin,” or “Red-Skin,” will carry no more significance than the nickname “Fighting Artichokes.” I really hope that Washington Redskins owner Daniel Snyder — who has so far refused to change his team’s nickname — will concur and continue to stand fast.