Executive Experience is a Joke 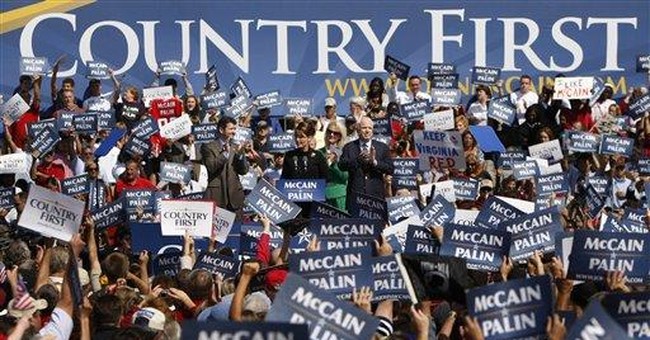 That was the year an egghead named Woodrow Wilson won the Democrats' nomination for president -- on the 46th ballot -- and chose Thomas Marshall as his vice president.

Based on his agitated reaction on his Aug. 31 show to Alaska Gov. Sarah Palin being picked as John McCain's VP, Stephanopoulos would have had a stroke over the combined executive inexperience of the Wilson-Marshall tandem.

And what qualified Wilson to become president of a far simpler, humbler America? Besides writing books pushing Big Government Progressivism and running Princeton University for eight years, that is? How about two years, one month and two weeks as governor of New Jersey?

Wilson's veep actually had more executive experience than Wilson. Tom Marshall had been governor of Indiana for more than three years, having been elected in 1908 as a dark-horse compromise candidate.

And what else had qualified Marshall to be placed a mere heartbeat or stroke away from the presidency for eight years? Nothing -unless you count being "a popular speaker" and "competent small-town lawyer" in Columbia City, Ind. (current pop. 7,000). Stephanopoulos is a devout Democrat, so he wouldn't have noticed Wilson's and Marshall's shallow leadership credentials -- which still surpass Barack Obama's and are almost the equal of Gov. Palin's career executive experience.

But let's get real. This whole debate over experience is foolish. Wilson did turn out to be one of our worst presidents ever, in terms of the long-term damage he did to America and the Western Europe. But no rookie president or rookie VP - no matter how supposedly experienced they are -- is really ever ready to do his job.

And as for Gov. Palin, she's Maggie Thatcher compared to many recent No. 2 choices -- most of whom have become political trivia questions.

Even staunch conservatives can't remember Bill Miller, Barry Goldwater's running mate in 1964 and a former seven-term congressman from near Buffalo.

George McGovern's initial pick in '72 was Tom Eagleton, a first-term U.S. senator and ex-lieutenant governor of Missouri. Though relatively qualified, he had to resign after it was learned he had had mental problems. He was replaced by Peace Corps founding director Sargent Shriver, who had high administrative skills and lots of Kennedy in-laws but had never been elected to anything.

And Sen. Lloyd Bensten, the veteran Texas pol George Dukakis chose in 1988? He's remembered for ridiculing Sen. Dan Quayle of Indiana, who eventually lived up to his questionable experience by setting the modern standard for bumbling VPs while serving George H.W. Bush.

Speaking of lots of inexperience, Geraldine Ferraro, Walter Mondale's Hail Mary in 1984, was only a third-term congresswoman of Queens. And let's not forget John Kerry's North Carolina sidekick, John Edwards. Rich and almost as pretty as Palin, he was a trial-lawyer-turned-first-term-U.S.-senator.

With Obama and his thin resume atop their ticket, Democrats are throwing rocks at Palin from a glass house. But Republicans look as silly by insisting that Palin is "ready to lead on Day 1" if McCain falls over dead at Thanksgiving.

Republicans should speak the truth -- that while Palin is smart, competent and conservative, she obviously doesn't know diddly about foreign policy today.

But, GOP bosses should say, she's cramming like crazy and we're praying that President McCain lives at least four more years so she can learn on the job -- just as tough guys like Coolidge, Truman, Nixon, LBJ and Bush I did.