A Start-Over Job for the ERA

Bill Murchison
|
Posted: Feb 18, 2020 12:01 AM
Share   Tweet
The opinions expressed by columnists are their own and do not necessarily represent the views of Townhall.com. 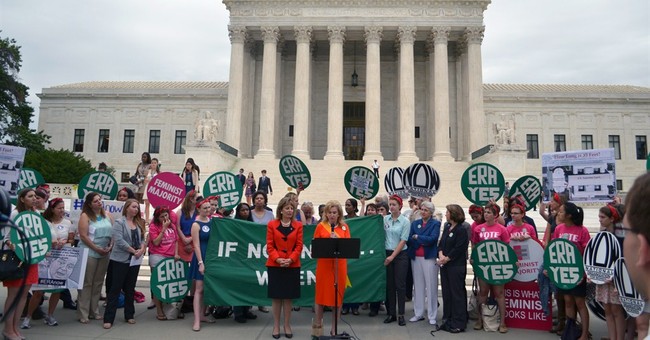 One immense reason for our present political entanglements -- would it be OK to say "messes"? -- is the lately acquired political habit of addressing every possible human problem through politics.

For instance, with regard to women's rights, the Equal Rights Amendment.

We don't as a nation affirm female entitlement to opportunities long gainsaid by social convention. If patient readers will indulge an unreformed Goldwater Republican, I can't wait until we hand the White House to an American Maggie Thatcher, female and conservative to the tips of her polished nails.

What's this business, then, about dusting off the failed Equal Rights Amendment from the '70s and welding it onto the Constitution? Why not? Are we against "equality of rights under the law... on account of sex," in the language of the amendment? Of course not: not if we all agree on the meaning of "equality of rights" and of "on account of sex." Which we manifestly don't: Witness our insoluble ruckuses over abortion, sexual "consent," and "diversity" in every possible form. Not to mention the meaning of "sex," that ancient term having given way in political usage to "gender."

All we need now, it seems to ERA promoters, is a new set of legal obligations to stew and fight over -- something else for the courts to decide, to the extent today's courts ever decide anything.

The ERA had been thought dead since 1982, Congress' last deadline for ratification. Ratification didn't come: in large measure due to the anti-ERA movement organized and propelled by the formidable Phyllis Schlafly. Schlafly, a political pugilist if there ever was one, rounded up so many female opponents of ERA that it became respectable, or at any rate, non-dangerous, to oppose, on common-sense grounds, a proposal with unforeseeable effects.

Likely it was the #MeToo movement that resuscitated ERA after decades during which fewer and fewer seemed to care about it. Just days ago, the U.S. House voted 232-183 to remove the 1982 deadline for ratification, Virginia's new, Democratically controlled legislature having earlier said a loud "yes" to the amendment. "It's not just about women, it's about America," said noted speech-ripper-upper Nancy Pelosi.

The speaker has a point. It is about America and the ways Americans address the problems they face. Do they make new rules to fit whatever case or cause they may confront? Do they seek something like peace and unity, or do they just not care about such apparent trifles, winning being the whole point of the exercise?

Testimony to the need for fairness and procedural order has come, to the shock of some, from Madam Justice Ruth Bader Ginsburg. RBG, whom no one ever mistook for a vassal of the male hierarchy, suggests that there is no power in government to extend the ratification deadline. Rather, backers of the amendment need to start over, she said. Maybe they'd win, and maybe not. In any event, they would be playing according to Hoyle, a point of immeasurable importance for seekers after consensus.

Hats off to RBG. Let the equal-rights-for-women debate, if there is to be such a debate, begin anew. And let us consider the circumstances and possibilities at stake, many of them unanticipated in the early '70s, when ERA gusts began sweeping state legislatures along.

What's the genuine need for ERA? Haven't we sufficient equal rights legislation on the books? What's an amendment going to do but gin up an infinite number of federal lawsuits that will drag through the courts for decades? In the '70s, we never imagined disputes over restroom use. What new issues would ERA license judges to semi-decide? Now that many Americans, male and female, assert the "right" to choose their own "identity," their own "gender," how does this play out in constitutional terms?

We are in deep water, are we not, over questions we never saw coming our way: questions to which no federal lawsuit suit can ever afford wise and widely accepted answers.

The ERA is cold and dead. Those who desire its alleged protections owe it to their country to show why we should afford it mouth-to-mouth resuscitation. I don't think they can, but if they want to give it a whirl, well, that's the American way.