Kavanaugh and His Enemies

Bill Murchison
|
Posted: Sep 07, 2018 12:01 AM
Share   Tweet
The opinions expressed by columnists are their own and do not necessarily represent the views of Townhall.com. 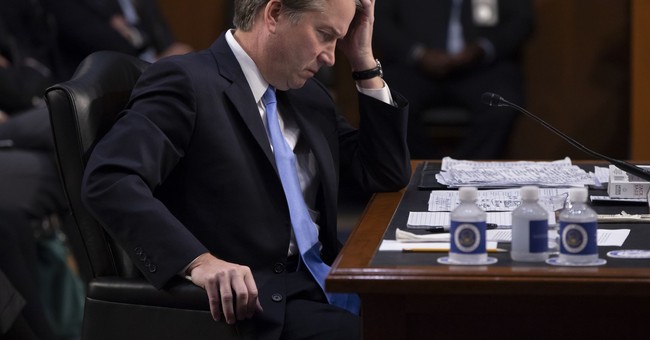 What's the point, really? Beyond political theater, that is.

The Kavanaugh smearing -- I mean hearing -- has naught to do with Senate inquiry into the fitness of Judge Brett Kavanaugh for service on the nation's highest court.

The death of Sen. John McCain, rest his valiant soul, provides Republicans the security blanket his absence for health reasons might have denied them, given the partisan lineup: 50 Republicans, 49 Democrats.

Assuming all the Republicans show up and vote to confirm, that's the ball game, regardless of whether red-state Democrats such as Heidi Heitkamp play to the home folks by supporting Kavanaugh.

What's the point, really, of the shouts and protests and bad behavior in the hearing room? And of abrasive Democratic demands to adjourn the hearings then and there? What's the point of Minnesota Democratic Senator Amy Klobuchar's positing of vague, nameless threats to "Foundational elements of our government, including the rule of law"? And, yes -- may we know the point of Democratic yearnings for a chance to find a government document somewhere (out of thousands hitherto turned over) that might hold the decisive clue to Kavanaugh's character.

What a shame it's come to this. But it has, of course. No one can convict our president of rendering the political process daintier than it was when he took office. The suspicion grows and grows, all the same, that in the political mosh pit of Washington grows increasingly hostile. And we might as well admit it. Television displays for those with the stomach for it what isn't exactly news any more -- the disappearance of intellectual honesty and other civic virtues into a maelstrom of not very appetizing sights. That seems to be at stake, not Sen. Klobuchar's anxiety over long-term prospects for threats to the very foundations of our government.

Threats, what threats? A key to all the posturing -- not all of it senatorial -- over the Kavanaugh nomination is abortion. It's conventional to depict Kavanaugh as the fifth, and essential, vote to reverse Roe v. Wade and thus crumple up the charter of the pro-choice movement. Where people get this stuff isn't clear: not from anything Kavanaugh has ever said; not from any realistic appraisal of how the court would get such a thing done without touching off another civil war.

Donald Trump likes to lob hand grenades into crowded rooms -- especially full of trade experts --and see what happens. That is the reverse of what judges do. Judges don't start revolutions; they can't. They make judgments as between contending parties. The parties take it from there.

I am not defending bad jurisprudence, which is as old as the republic. I would say the Garden of Eden, if they'd had a court system back then. I am saying judges have no armies with which to enforce their will. As with Donald Trump's hand grenades, they throw stuff out there and await the result, which, in a democracy, must be a result more or less consonant with the public will.

Charges that Kavanaugh wants to get on the court and throw out Roe v. Wade are balderdash. Roe was execrable law when it was handed down; it's execrable law now. That doesn't mean, as everyone with two or three active brain cells is aware, that you overthrow Roe and -- presto! -- no more abortions.

So what goes on here? Nearly all Democrats depend for political sustenance on the money and votes of the anti-right-to-life cause. That's what goes on here. When Planned Parenthood, and related activists, especially of feminist vintage, say, "Jump!" you say, "How high?" That is, if you're a Democratic senator. You don't care about Judge Kavanaugh's credentials. You care about the assorted activists, and their encouragers in the media, who glower over your shoulder and with whom you likely agree anyway, or you wouldn't be a Democratic senator.

Yes, we know what goes on. And we're duly embarrassed, or ought to be. Genuine moral and intellectual concern for public service gets kicked out of the hearing room, displaced by screaming protesters and the insincere platitudes of men and women old enough to know better. Unless life in Washington, after a time, disables your nonsense detector.