Bill Murchison
|
Posted: Aug 21, 2018 12:01 AM
Share   Tweet
The opinions expressed by columnists are their own and do not necessarily represent the views of Townhall.com. 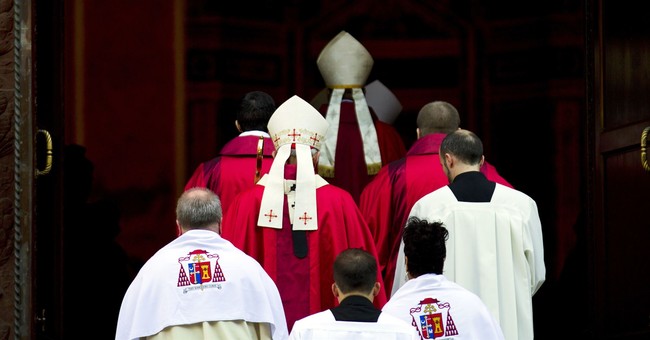 First, the grand jury report: The accounts of abuse, humiliation and degradation on young people. And then everything hidden from view as far as possible -- made to seem just, oh, you know, sort of digestible with a little effort and a lot of pretense.

The identity of the offenders is the second horror: priests who betrayed God and their sacred vocation. Injuring the innocent; spoiling their lives and prospects; eating up in single gulps the accumulated trust of those who, whether abused personally or not, have regarded priests and their requests as God-centered. All this... why? For personal gratification, it would seem. For joy and for excitement, maybe. For the thrill, possibly, of committing moral treason and getting away with it.

And then the third horror: the abasement of an ancient, beloved and worldwide Christian community by its own. Or by those who represented themselves as the community's own, to the ridicule and vituperation of bystanders who wished this particular community no good in the first place and would be glad -- any number of them -- to watch it dry up and blow away. "No decent person should be a Catholic any longer," wrote one commentator on the New York Times' website the other day. The sin of the priests enabled a second commentator to proclaim: "No other corrupt organization has evaded the scrutiny of federal prosecutors the way the church has." And so on.

The society of the 21st century is not shown as often as it needs to be shown the consequences of the chest-pounding claim to personal autonomy: the "me" of everything, as distinguished from the "us" that underpins civilization.

Hey, you. I need this and that. And I want it this minute. That's our present moral mode. My claims, my needs, my way of seeing things. It's the American way, right?

Nope. Never was before. The American way encouraged individualism, all right; individuals, nevertheless, acting as such, were generally bound by society's rulebook to take into account the rights and needs of others.

The rulebook made no room for filling the mind of a 10-year-old with lies and nonsense about, let's just say, whatever one imagined one's own dark needs to be. Nor had the rulebook anything in it about the beauty and splendor of treachery, imposed externally or manufactured internally. Traitors are and forever will remain lice. However, it seems to me the louse element in our society flourishes with a freedom once denied by the larger society. That's thanks to what we suspiciously call our "moral freedom" -- our supposed right to make ourselves happy in the way we envision happiness.

There are two necessary views of the Pennsylvania horrors and of like horrors known lately to have enveloped sports, politics, entertainment -- you name it. There's the short-term view: grim, sickening; despoiled lives; traitors at large, and quite a lot of them pleased with themselves. The short-term view has to do with betrayal in a society less and less connected to the obligations of compassion and respect, more and more adrift on a sea of endless personal choice, where "What I Wanna Do" seems generally to come first. The irony here is that the moral code setting these considerations in large, bold type is the code the errant priests signed on, supposedly, to declare and adorn with their words and actions.

Far more compelling is the view where the road winds up the distant hill toward a future at least partly cleansed of the moral stupidity that allows the best -- and the worst -- to have what they want... at everyone else's expense.

The Catholic Church will purge itself -- as it has done numerous times throughout numerous centuries. The task will be painful, like the lives of so many newly acknowledged victims of the My Way gospel. At least we know better now than before how cruel is that gospel. It is one reason we have churches -- to show us such truths.