Heroism in a Dark Theater

Bill Murchison
|
Posted: Mar 06, 2018 12:01 AM
Share   Tweet
The opinions expressed by columnists are their own and do not necessarily represent the views of Townhall.com. 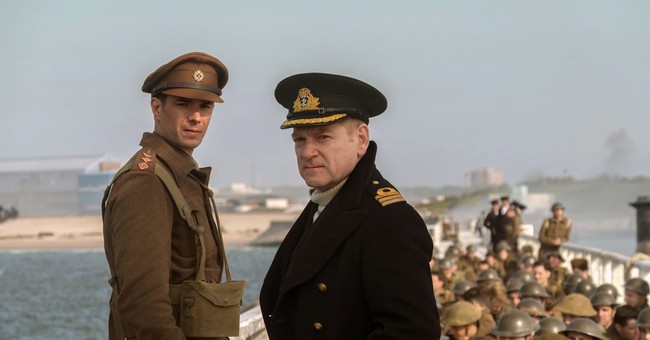 The explicable story of "Dunkirk" lost the Academy Award for best picture to the wholly inexplicable tale of how an underwater critter and a mute janitor fell in love -- which shows you the inexplicable dimensions of the world the movie industry imagines itself as inhabiting these days.

But Winston Churchill showed up also, both as a kind of backdrop in "Dunkirk" and as the hero of "Darkest Hour" (portrayed by Gary Oldman, in a superb impersonation for which he was named best actor). Below the surface of this concurrence swim critters more familiar than the merman of the Oscar-winning "The Shape of Water" -- more familiar, and far more indicative of how the world really works.

I gave up years ago analyzing the Oscars in terms of what America believes and where it wants to go as indicated by its taste in movies. What a heap of rubbish always lay at the end of that path.

No Oscar analysis, then. Sorry. I salute, at the same time, the movie industry's unexpected contribution to national well-being through its focus on the British government and the British people during June 1940.

How come such a focus? It was 78 years ago. Americans don't care what happened, do they, 78 minutes ago. You often get that impression. Still less do they care what happened across the Atlantic Ocean way back then. Right? Or is it? Does appreciation of valor and heroism and sacrifice lurk, hidden, in our great unconscious? That would be something worth noting.

A brief review: In 1940, Great Britain -- for all its great power not yet dissipated -- seemed ready to drop into Hitler's lap like an overripe plum. France had fallen. Britain was alone. Yet Britain endured. And it went on from mere endurance to victory.

An extraordinary rescue by private agency -- fishing boats, pleasure craft of all kinds and descriptions -- took place with the Royal Navy's collaboration. More than 300,000 French and British soldiers were whisked from French beaches to safety in England. The war would go on. Hitler would not prevail, not with Winston Leonard Spencer Churchill heading Britain's government.

The Churchill so winningly and vividly portrayed by Gary Oldman was an immense figure, a heroic figure, to use a term not much in currency these days (due, possibly, to the general lack of heroic figures, both here and abroad). He was dauntless. He possessed something of significant importance: an electrified sense of Britain's place in human affairs as bulwark of the human liberties Britain had done more than any other country to advance.

He set his jaw. Such a country could not be allowed to fail. Fail it might -- but only in the face of overwhelming power.

Why the story of Britain, June 1940, at such a moment as this one? Why not one but two movies? Virtually overlapping each other? Lacking all the appurtenances of modern concern (i.e., captive sea creatures)?

As I said, I have sworn off cinematic trend analyses. I will venture instead that human heroism never goes away as an inspiration to those who view it -- in books, in life, in darkened theaters. It points upward instead of downward, outward rather than inward. It makes the fists clench in resolution. It can make you want to sing and tap your feet in time to the music. It may draw a tear, not to mention cascades of the salty stuff.

Looking out for No. 2, or No. 3 or 4 -- instead of, you guessed it, No. 1 -- turns out to kindle the emotions higher and hotter than all the inward-facing attributes that mark present-day art and music and literature and political culture.

We seem still to know it. And to value it when, for some mysterious reason, two pieces of art, at a single moment, bring to mind once more the uses of courage and honor and conscience.

The modern movie industry puts before us -- in reds and blues and yellows -- just such deep and permanent matters, more than making up for its all-too-obvious adoration of overinflated acceptance speeches and, for some unfathomable reason, "mermen" loved by mute humans.