The Wrongheaded Uproar Over DeVos

Bill Murchison
|
Posted: Feb 14, 2017 12:01 AM
Share   Tweet
The opinions expressed by columnists are their own and do not necessarily represent the views of Townhall.com. 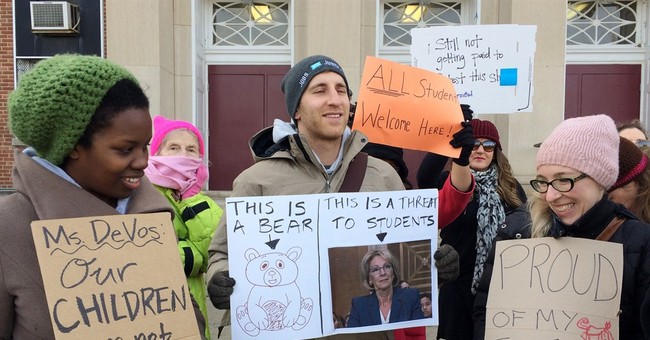 Trending
The bad thing about elective politics (not the only bad thing; there's a long list) is the philosophical and, especially, rhetorical extremes into which it squeezes differently minded folk, who, more and more frequently, find themselves saying things like:

"You (expletive) hater of (fill in the blank)." Which could certainly be the case in certain cases. How about public education, nevertheless? Are there two sides, and two sides only, to the debate over how to educate American kids? The bitter and acrimonious attacks aimed at Betsy DeVos, Donald Trump's secretary of education, leave you with that impression.

DeVos' fervent support of vouchers led the teachers unions that control vast swaths of the Democratic Party to insist -- at top volume, and with purpled veins -- that the woman tasked with running federal education programs hates public schools. The unions' line on DeVos, during the debate on her nomination, was: Defeat the nomination or watch public education disappear.

Just days after DeVos was confirmed (by virtue of Vice President Mike Pence's tiebreaking vote), protesters in Washington, D.C, harassed her during a middle school visit, chanting, "Go back! Shame! Shame!" A spokesman for the protesters promised to "unleash our activists in a way that I don't think any secretary of education has ever experienced."

That's probably true. Old rules of civility in debate seem to exist in a notebook no one can find these days. More to the point, discussions relating to public education center on jobs and how to keep then, whereas pupil success was once supposed to be the overriding aim of the teacher.

Generalizing about teachers is like generalizing about journalists: You've got great ones; you've got lousy ones; and you've got a lot of in-between types. Where does that leave us? In the name of Horace Mann and, might I add, Rowena Wilks, who taught me sophomore English at Corsicana High School in Texas, it should leave us considering the product.

Those public schools that educate, through the ministrations of dedicated teachers -- bless 'em! Leave them to do the work in which American public schools used to specialize: namely, stuffing minds with knowledge and hearts with ambition.

I am a graduate of the public schools, and the son and nephew and brother and brother-in-law of public school teachers who, in my own estimation, faithfully honored their callings.

I also support DeVos' goal of giving parents, through voucher programs, plus the availability of charter-school attendance, the option of leaving behind negligent teachers at unsatisfactory schools.

Am I therefore -- like DeVos, in her critics' accounting -- an enemy of public schools, a hater of teachers, the sort who supposes only Republicans need educating, and as for the rest, who cares?

Hmm. Wouldn't the real point be to figure out what works for kids, educationally speaking? If the public schools of today worked as well as they ought to (and once did), would we hear the clamor for alternative programs? Would that clamor be led, as in fact the case is, by parents?

The anti-DeVos, anti-vouchers faction in the Democratic Party can't explain what kind of satanic impulses seemingly inform the push for choice in education. Choice is "un-American": When did that happen? When did it get to be the stated policy of government that there's no recourse in the face of substandard performance by government? Was it around the time that the teachers unions became the biggest funder of Democratic candidates?

In one way, the argument over federal education policy distracts and saddens. Education, prior to the mid-1960s, when Lyndon Johnson opened the federal vaults to public schools, was a local responsibility, in no way the business of Washington, D.C. There was no secretary of education to oppose or support.

Things were simpler -- and better and more harmonious with our country's governing design -- back then. But that's gone. What remains is the need to argue, in an educational context, for what works, as opposed to what doesn't. Betsy DeVos has the difference down pat. We need to watch her, not with animosity but with hope.