Who's 'Crazy' Around Here? 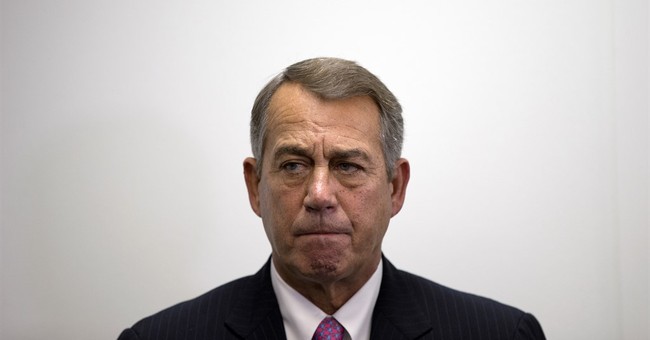 It strikes me all of a sudden that a word spoken on behalf of the Republican Party's "crazies" might not come amiss.

Ah, those half-wits, those yo-yos, those howlers at the moon -- just look at 'em! Overthrowing House speakers, threatening to shut down Congress over funding for Planned Parenthood, allowing no end to trouble for responsible GOP leaders! And all of this to the vast entertainment of the liberal media.

So, what kind of word might be appropriate to speak on behalf of the House's Freedom Caucus and their allies in the Senate, such as Ted Cruz? Let's steer clear of considering the speak-loudly-and-lay-about-with-a-big-stick tactics, asking instead how it could have come to this.

I speak as one who thinks John Boehner should continue to run the House; who thinks shutting down the government would make zero sense; and who regards Donald Trump as a shameless blowhard, to be trusted no farther than the present writer can throw the family grand piano. The thought of Trump in possession of any political office higher than second assistant dogcatcher gives this writer the willies and the shakes.

So, yes: How could it have come to this? Here's the surprising part: It just about had to, given the country's migration over the past half century from comparative (I said comparative) calm to a state of constant revolution.

People who just won't leave things alone -- because, frankly, they're smarter than us (and our present president is one of them) -- are in charge. Theirs is a new vision of what America ought to be: less proud, less confident, less optimistic; more ashamed of its heroes and its history; ready to make restitution for its national sins.

Barack Obama is the president of Restitution in undiluted form. He wants to do penance for such things as allowing concentrations of wealth, failing to spread opportunity more widely and using force to advance foreign and domestic aims.

A subsidiary point about the president's achievement rarely receives acknowledgement. It is that he doesn't stand out in left field all by himself, magically retiring batters and runners of the conservative persuasion. He won, fairly and squarely, two presidential elections. His party, for the first two years of his presidency, controlled Congress -- by gift of the sovereign people. These same sovereign voters consented to his diagnoses and surgical procedures. Had the case been otherwise, his procedures would have been called off in 2012. He would not be president now. But he is. We the people returned him to office.

What does that mean? It means our president may not be so far out in front of popular opinion as is sometimes supposed. It means there may be less appetite among us for cutting taxes and reducing regulations than -- I'll put it this way -- there jolly-well deserves to be. It may mean that traditional moral teachings and arrangements enjoy a smaller public than the let's-do-what-we-want-to-do faction does. It may mean that parity with other societies appeals as an ideal to more Americans than does star-spangled American exceptionalism.

In the lamentations of the "crazies" can be detected an exasperation I am certain that John Boehner -- a true conservative -- shares in spades. No conservative welcomes installing someone else's idea of useful change in place of his own idea, least of all when change X or change Y makes life more disagreeable, more irrational, less free. As at present, if you please, in the Land of Obama.

We conservatives are a prickly breed. None of us agrees with government regulation. The great majority of us believe the Good Book is good for mighty specific reasons. We find American ideals more plausible on the whole than ISIS' or Czar Putin's. That can make us, in times like these, more cranky than usual.

But we're not crazy. And truly, neither are the "crazies."