Marse Robert and the Lynch Mob 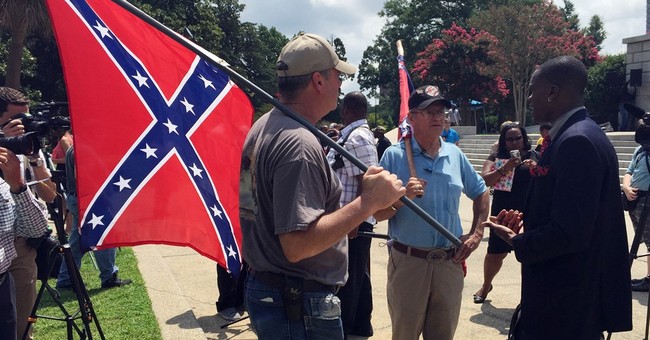 From across my small office I winked at Marse Robert. He winked back -- so his 7-by-6-inch portrait seemed to suggest -- white-bearded, gray-uniformed, arms folded serenely and confidently. When the nation whose future military leaders you trained at West Point mauls and mutilates the cause in which you trusted, serenity comes hard. Only a Robert Edward Lee type can pull it off, a type of which there aren't many, if any. This type exemplifies the workings of love in combination with moral firmness.

It turns out in 2015 that an angry slice of the population has made it an article of faith that nothing too bad can happen to the reputations of Marse Robert and that whole parcel of mangy, long-dead Confederates who deserve (if you take current rhetoric seriously) to burn in Hades.

Boo! Hiss! Fie on 'em! Away with the bloody rag they carried at Gettysburg and Shiloh! Yea, brothers and sisters -- uninspired by that blue-slashed banner, dim-witted, demon-driven Dylann Roof might never have contemplated slaughter and sacrilege at Emanuel African Methodist Episcopal Church in Charleston. Plainly, it's all the late Confederacy's fault. They did it! Someone get a piece of rope so the lynching party can begin. Best of all, they're dead, every one of 'em! And it's certainly easier to hang a dead man than a live one.

Calls resound, from right and left, for pulling down statues of Confederate heroes; for attainting them one and all as traitors and hound dogs; for renaming schools (such as my Robert E. Lee Elementary in Corsicana, Texas) and streets and highways and parks disgraced and defaced by their links with the hound dogs.

It's mass, if momentary, insanity: far more to do with feeling virtuous on the inside than with hitting a genuine lick for justice, far less to do with confronting and routing humanity's still-living demons, whose habitat is hell -- not, as is rumored, Charleston, South Carolina.

Not a few of us know these things. Bouts of insanity constantly torment the human race. Lynch parties form at the drop of a hat. Rope, rope -- hang 'em high!

Never mind subtleties -- the Old South's serious conviction, for instance, that the Yankees were out to nationalize, by force, their homegrown brand of racial justice; the North's role in marketing the slaves that later Northerners decided to liberate; the superb valor of Confederate troops outnumbered from the start, fighting on in rags and with empty stomachs; the ungodly cost of the war -- 750,000 lives lost on both sides and economic ruination for the South; post-1865 America's avid desire for a reconciliation based on mutual respect; the reconciliation that Southerners, black and white, more lately have furthered since the doomed and temporizing system of race relations adopted in the 1890s went away.

Such considerations, you might think, should calm post-Charleston ire. Evidently not. First come the tantrums and the laying about with language. Rope, rope -- where's the rope!

History -- the story of humans -- generally turns out to be more complex than humans suppose. We are always in for something new. The staunch Confederate pride that my parents, born in Texas approximately four decades after Appomattox, recalled as part of their early environment, was unsustainable. Taps for the Lost Cause has been sounding for decades. Many of us Southerners, believe it or not, go months without reflection on The War and its aftermath.

Better to meet the newest New South, with its car factories and Asian communities, in a spirit of genuine reconciliation than one of rage over its suddenly controversial symbols. You don't beat people into agreement; you coax them -- if agreement rather than political triumph is the point.

One can't know for sure whether it is or not. We're, as I say, a complicated race -- those carrying the rope, those resisting that particular manner of neck-adornment.

Marse Robert? I gaze with enduring respect upon his grave and dignified face, lined by a deep understanding of life's contradictions. I think he wonders -- he must! -- why now the present loud outcry. Are we not all Americans? Have we not died and cried together so that together we might live?