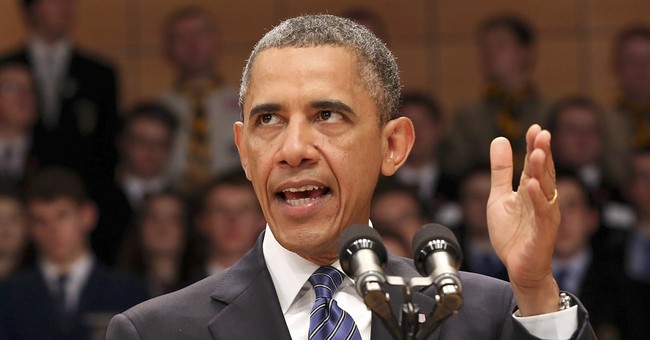 Seventy percent of Americans oppose the barely visible military support the Obama administration last week promised the Syrian rebels. Seventy percent! I doubt if such a large figure could quickly be gotten up in favor of free lemonade on the 4th of July.

The public, according to Pew, feared the rebels might be no better than the government; in which case, why were we helping them? The New York Times itself -- house organ for the administration -- expressed uneasiness "about getting pulled into yet another war in the Middle East," given our dismal appreciation of how the wars in Afghanistan and Iraq "sapped the United States" without producing results classed as more than "ambiguous."

Isolationist sentiment, which used to run deep in the American character, most recently after Vietnam and before the Iranian hostage crisis, gives evidence of reemerging. The immigration debate is case in point. Why does everybody in the world seem to want to live here? That's one of the questions driving the debate.

What the Times calls the ambiguity of our military career in Iraq and Afghanistan -- neither country turned overnight into a robust democracy on the order of Chicago -- certainly contributes to doubts that we should be intervening even mildly, tentatively, hesitantly in Syria. What contributes even more to it, I would say, is Barack Obama's failure over the past five years to explain what he sees as America's position in the world.

I would venture a reason for that omission: He doesn't seem to know what that position ought to be. He hasn't reasoned it out. He seems to want other countries -- in the Middle East or the Islamic world, including Turkey, Iraq, Afghanistan, Egypt, Libya and Syria, plus Russia -- to figure what they want, then tell him how we can work together.

The United States has never had such a non-foreign policy as it has presently, which is perhaps why so many American tend to gaze at it in befuddlement. What is our national interest? We never hear the question raised anymore, not since the George W. Bush administration. The American interest, according to Bush, was the implantation of democracy in the soil of autocracy, so that good and generally peaceful behavior might flourish where hatred and oppression had been more common.

Well, all right, you didn't have to agree the Bush policy was wise or practical. But you could agree that at least it was a policy. Obama certainly agreed on that. He heckled and opposed the Bush policy in 2008. We had to cease our overseas military adventures, he said. We had to press the "reset" button with countries such as Iran and Russia. What did it mean to press the reset button? It turned out to mean nothing more than a few speeches.

What was all to come of it was another matter. We could kind of all get along. That seemed the essence of the Obama approach. We'd be nice; other countries would be nice in return.

It turns out that foreign policy -- a thing rooted in national rivalries and jealousies, not to mention hatreds, is conducted below the surface of public life. It is a bit more complicated than allowed for by Obama's logic. In the real world, people are prepared to hack your computers (China), build dangerous weapons (Iran), kill your diplomats (al-Qaida), lie about you (Afghanistan's Karzai) and do other bad things to you.

When it happens, and it always does, a democratic leader needs to be able to talk to people so as to solicit their support and prepare them for setbacks, as well as successes. It can work -- as when Churchill enlisted the British people in the near-impossible cause of beating Hitler. It can fail -- as when a White House staffer, rather than the President himself, announces that, um, we're about to intervene, sort of, in a foreign country where, ah, we think events compel us to do, that is, something.

The most naive foreign policy president perhaps in our history seems unable to appreciate the difference.