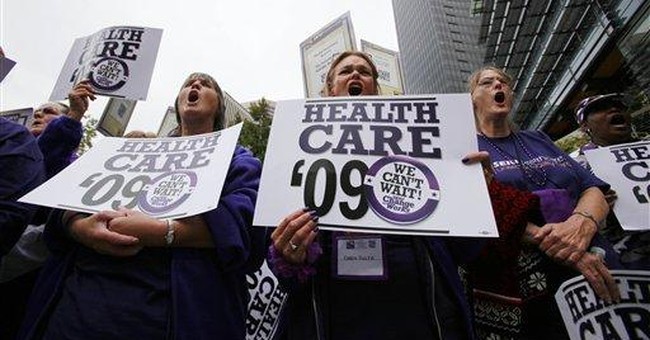 The more it changes, the more it's the same, hmmm? In this present instance, meaning our country's seemingly fresh-scented wrangle over union power. The scent isn't fresh at all, nor is the wrangle. The arguments are old, the question at stake is old: namely, when is the public interest served by giving organized coercion its way?

Lately, we haven't thought much about that question in America; which is why Wisconsin takes us by surprise -- the raging public employees, the adamant governor and the fugitive Democratic senators, hiding out to avoid a vote on stripping public employee unions of most collective bargaining rights. What's this? Teachers abandoning the students whose parents pay them?

It's the nature of the coercive approach, the union approach: here, give me your arm so I can twist it. Unionism doesn't work apart from organized force, as in the union heyday of the '30s and '40s. Unionism gained popular support in that day against supposedly heartless employers who expected workers to work on the terms they accepted when hiring on, not on those terms the union demanded, such as higher wages.

Unionism's chief coercive tactic is the strike -- the withdrawal of services as a means of making employers do things the unions' way. The mere threat of a strike could make employers come around. Unions ruled the roost in late-industrial America -- until paying the price of organized coercion became too great for employers who closed plants or took their work overseas.

Even before that, organized coercion was turning off the public. A wave of post-World War II strikes in steel, automobiles and electrical manufacturing disrupted daily life. John L. Lewis, of the flamboyant eyebrows and rolling rhetoric, led coal workers on strike in April 1946, causing much of the country's industrial production to shut down. The U.S. government took over the coal mines and imposed most of the union's terms on the owners. President Truman talked of drafting workers into the military if the railroad unions went on strike.

The Republican Congress, elected that year, passed the Taft-Hartley Act over Truman's veto, restricting organized coercion in various ways. Among them: banning the closed shop -- i.e., you had to join a union to work -- in states that adopted right to work laws. Among issues agitating Midwestern and Northeast public employee unions in 2012: proposals to pass right to work laws, as have 22 other states, and accord workers the right to refuse union membership.

Organized coercion by labor works in limited and specific ways. As we see, it can shut down schools in Wisconsin. It also works against itself. Basically, it undermines flexibility and freedom, two essential attributes of flourishing economies. A union that can say, "Do it our way, see?" is thinking in the terms of today rather than those of tomorrow -- the province of businessmen alert to changing conditions that require constant adaptation. A union contract -- the modern equivalent of the Law of the Medes and the Persians -- is the last place you look for flexibility and permission to alter flagging or flabby strategies. Organized coercion abjures flexibility. What's good for one is good for all, might be its creed.

Naturally, organized coercion provides no room for individual dissent. The closed shop exists to keep dissent to a minimum. How else ya gonna present a united front? All together now: We want ... we want ... !

Human affairs since that messy business in Eden require constant rebalancing. The old unions weren't always wrong about the indifference of capitalists who minimized compensation and safety requirements to save money and cut corners. The human race, if we don't all know it by now, is generally nutty. What, all the same, is organized coercion save the dictatorial enterprise of people who, via their own membership, in humanity are as nutty as anyone else?

The marketplace, with its large space for choice and constant realignments of ideas and enterprise, is the forum that can reinvigorate America. That's what Gov. Scott Walker of Wisconsin sees, with a clarity and courage that do him honor.