'The Public be Damned' 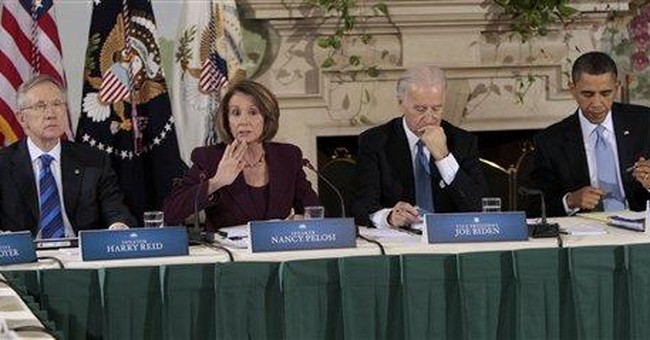 You there! Congressman! Come out from behind that tree! The speaker of the House has wonderful plans for you, involving the very sharp sword she says you're going to fall on for the greater glory of … whatever.

Wondrous to behold are the leadership instincts of a Democratic establishment conflicted when it comes to Obamacare. Not that Nancy Pelosi has doubts. As she told Elizabeth Vargas on ABC's "This Week": "Why are we here? We're not here just to self-perpetuate our service in Congress. We're here to do the job for the American people" -- the speaker's assumption being that the American people desperately crave the Democratic health care scheme and won't mind sacrificing an indeterminate number of Democratic congressmen to get it.

That some of the congressmen in question might mind seems not to occur to a speaker whose own San Francisco district, one of America's most ideologically off-center, fits her securely. Speaker Pelosi probably could win local acclaim if she shoved through a bill requiring cars to run on fog and political gas.

The Great Health Care Cram-Down requires more, nonetheless. "The public be damned," as Commodore Vanderbilt once exclaimed in a moment of exasperation with the yokels. The Real Clear Politics poll average on health care, Democratic style shows 51.3 percent of Americans against it, with 40.3 percent in favor. A Quinnipiac poll says a mere 35 percent endorse the plan.

As for the credentials of the reformers themselves, here's more fun. Real Clear Politics averages out Congress' job approval at 18.8 percent, versus 75.6 percent with thumbs pointed resolutely downward. Now there's a mandate for you -- a mandate to sneak off in the night and wait until it all blows over.

Which, alas, it won't because the Democrats have decided to do this deed no matter what. If doing it costs various congressmen their seats, well, that's life.

Nearly as awkward as America's health care perplexities is the leadership style of the political figures addressing, supposedly, those perplexities. Authoritarianism isn't the style we generally associate with people who call themselves Democrats.

True, the sovereign people can be wrong: In which case, from time to time, their elected leaders have the duty to correct them. In the present case, this excellent theory just doesn't apply.

The health care monster isn't a plan that can be analyzed like a normal proposal. It's a congressional concoction whipped up to please the bare minimum of members tasting it. Votes, rather than anticipated results, is what this thing is clearly, and disastrously, about: Large nips here and gigantic tucks there to attract support, never mind that we're dealing, as is so often noted, with one-sixth of the U.S. economy.

Now a basic principle of politics should be care in large things, with recklessness, to the extent it enters the picture, reserved for things that can be undone, errors that invite atonement. The means of undoing Obamacare, should enough Democrats duly fall on their swords, crying, "Hail, Caesar; we who are about to die salute you!" -- the undoing, I say, or even the modification of Obamacare would be no easy thing.

There would be constitutional challenges in federal court; e.g., can the government require a freeborn American to purchase insurance? There would be some retributive scaling back after a probably early capture of the government by Republicans and Tea Partyers. Yet you don't easily repeal a law that affects assumptions and plans concerning a sixth of the economy.

The Republican call to "start over" is parodied as politics. It's not that at all. It's a reflection of the reality that on a matter so urgent as health care we should take the time to do it right, not rush it through, then utter a long sigh of political relief.

On this one, numerous moderate Democrats are right to be deathly afraid of the voters. The speaker of the House is desperately wrong not to care for anything but the shallow, transitory victory on which, for some illogical reason, she has her heart set.