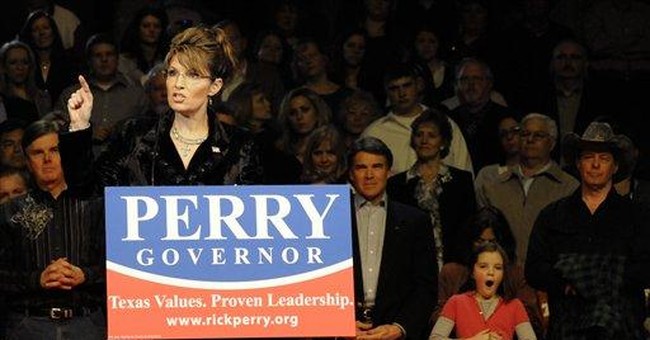 Heavy weekend snowfall closed down the capital of the United States. Not that many outside the Washington Beltway were sorry about it. Possibly -- by their reasoning -- the blizzard was God's gift to decent government, a holiday from the ceaseless commotion, braggadocio and show-offing that have become the capital's principle pastimes.

Did Sarah Palin bring down the house in Nashville, Tenn., at the big tea party bash and the next day at a Rick Perry rally in Texas? By virtue of her considered views on Federal Reserve reform or transportation policy? Nothing of the sort. She laid into the Washington politicians, calling for "another revolution." Wow. That's pretty stern talk. And the crowd loved it.

On Monday, a Rasmussen Poll indicated why. Seventy-five percent of likely voters, the polls said, are "at least somewhat angry at the government's current policies." That's both parties in the government. Sixty percent, according to Rasmussen, believe "that neither Republican political leaders nor Democratic political leaders have a good understanding of what is needed today." Just 52 percent thought that way in November. Forty-nine percent are worried not that the federal government will do too little to "help" the economy -- rather that it will do too much. Fifty-nine percent favor tax cuts over increased federal spending. For the size of the deficit, 83 percent blame Congress rather than want-it-all taxpayers.

In an interview before the Super Bowl, President Obama announced a Feb. 25 half-day "bipartisan health care summit" that he said would be televised live. The president said he wanted to see what Republicans could bring to the table -- except he won't allow them to propose taking time to start over again. No way, it seems, are we going to hit reset. We're going to figure a way to meld two bills that nobody anywhere likes very much.

Obama's aggressive tone to Republicans -- "How do you want to make sure that the 30 million people who don't have health insurance can get it? What are your ideas specifically"? -- pretty much dooms the event, save as an occasion for Democratic and media bashing of Republicans. On the other hand, that may not matter. Polls show Americans opposed to health care in its present big government configurations. Attempts to cram -- the precise the word for it -- health care down the nation's throat will meet a popular hostility, for which it seems to me the Washington establishment isn't prepared.

"Let's take our country back," cried the Divine Sarah (allow me to borrow the great Bernhardt's nickname) at the Perry rally in Texas. Back from whom? How? When did they get it? Never mind. Point is, whether or not we live at one of those storied historical "turning points" we read about, deep anger concerning government is real. Those who govern us smirk at their peril.

Feelings of national inefficacy are rife. We can't get the job machine cranked up, and our government gives the impression of sappy solicitude for the rights of terrorists. A voter can work up a pretty good head of steam contemplating such data. Meanwhile, the Divine Sarah declines to foreswear a presidential run.

The adulation she evokes has something to do, of course, with her brass and sass. What we can't overlook, at the same time, are the targets of her sass, namely the perpetrators of national anxiety and, as she sees it, decline. The "perpetrators" don't see it that way; but, then, they wouldn't -- cushioned as they've been by the prerogatives and perquisites of high office. These very prerogatives, by the way, they gained at the polls. None would be in office today but for the people's concurrence. That's how democracy sometimes works: hope, followed by remorse.

We're in the remorse stage now -- a stage that will pass (because it always does) but which, right now, is potent in the extreme. And overdue, if you want the truth. Government is out of hand. It is too big and bossy. Something does need to be done. Hold tight. Now, tighter...