Brown and the Revolt Against Arrogance 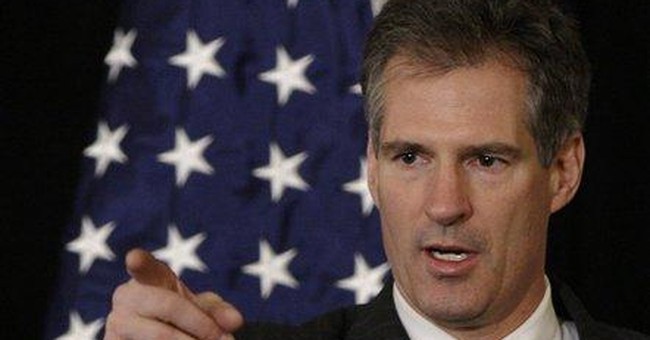 Massachusetts stared the gentleman in the eye and stuck out its collective chin. Backwards, commanded the electors who seated their first Republican U.S. senator in three decades. It was a bold and brave response. Backwards to what?

Difficult to frame it on a map, with degrees of latitude and longitude. A place, maybe, loosely resembling the America of five or six decades ago, before mere elected officials thought they ran the world and all in it. Which they don't, but you'd hardly believe it by watching them operate.

Democrats in the present instance were on the receiving end of the public's anger and exasperation due to their stubborn refusal to hear other people's viewpoints about health care reform or to acknowledge that terrorists and suicide bombers qualify for the barest minimum of constitutional sympathy. Wise Republicans, should the GOP soon snatch back the power it lost in 2006 and 2008, will warn party members against the same kind of tone-deafness. The people won’t take it. Maybe you think they should. Well, they won't. Don't try it.

Democracy has its obvious imperfections, but if you live under one, you'd better buy into the idea -- as Nancy Pelosi, Barney Frank and Obama himself clearly haven't. The Democrats' view of democracy is monarchical. Shut up! They happily explain: here's what we're doing.

It isn't so much that Americans bridle at the idea of health care reform. They bridle at the Democrats' mule-headed attempt to do "reform" the way they want to do it, no questions asked or answered. What happened to Obama's campaign promise to negotiate the final bill on C-SPAN? Well, um, circumstances changed; no point in it, and that's just the way of things, sorry. As Scott Brown said in his eloquent victory speech on Tuesday, "What I've heard again and again on the campaign trail is that our political leaders have grown aloof from the people, impatient with dissent, and comfortable in the back-room working deals."

I've a theory that American politicians aren't worse, intrinsically, than they used to be; they're vastly more powerful -- that's the point surely. They're more powerful because government itself is more powerful, not to mention more bloated, more self-centered, more everything except mindful of mere voters.

We're supposed to know what's wrong with that, though we often pretend not to understand Lord Acton's justly famous throwaway line: "Power tends to corrupt; absolute power corrupts absolutely." It's a theological question, almost: the congressman as minor Greek deity, the president dwelling amid thunderbolts and clouds of incense.

Hubris -- unchecked arrogance -- is ruining the very Democrats the voters put in office to rebuke the Republicans who seemed for a while to be ruining everything they weren't actually ignoring.

Obama beckoned the voters "forward"? Forward to what -- more disdain for their viewpoints? Not much appeal there. Nostalgia always tugs at human hearts. In the present case, nonetheless, a glance "backwards" shows us a country and a people less disposed to thumb their noses at voters -- while posturing innocently about the people's will. If the people really wanted health care, Democratic-style, without discussion, without candor, without concern for the cost in money or personal freedom, Martha Coakley would today be nuzzling her future fellow senators on the cheek and hiring Washington staff.

The love of power got to the Democrats: the love of big-shotting it before the cameras, as if senators were resident royalty rather than servants. Come to think of it, Scott Brown put the matter with great precision in his now-famous answer to David Gergen's question about responsibility for the maintenance of "Ted Kennedy's seat." Not Kennedy's seat, "the people's seat," Brown replied in setting Gergen straight.

Let Brown keep up that style of talk, that kind of thinking, and Massachusetts in two years could renew his lease on the seat. Let other politicians start talking the same way … well, hold on. How many miracles can a sadly stressed-out country stand all at once?