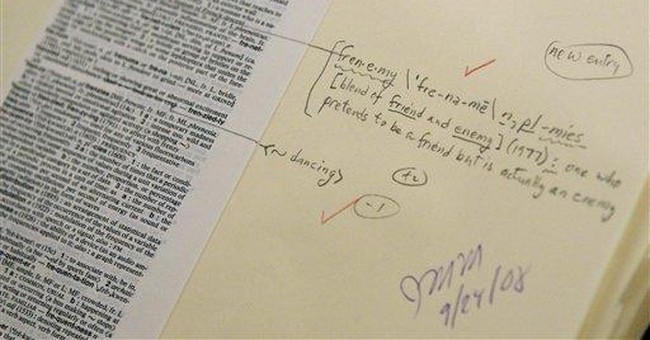 Can't stand to watch the English language's losing encounter with the culture of who-cares-anyway? A new book says, get over it, fella. "Too often," argues Jack Lynch, professor of English at Rutgers University, "the mavens and pundits are talking through their hats. They're guilty of turning superstition into rules, and often their proclamations are nothing more than prejudice representing itself as principle." Ouch! Goes one of the pundits on whose hand the professor's ruler descends.

A New York Times review of Lynch's "The Lexicographer's Dilemma: The Evolution of 'Proper' English, From Shakespeare to 'South Park'" goes along generally with the professor's low view of mere rules "that editors and other grammatical zealots wave about like cudgels." Lynch would have us know it's always been so: One set of "standards" eliding over time into another set and grumpy old pedants shedding tears. English, like a turbulent stream, is dynamic: always refreshing itself with new modes and models and images.

So what about all this, then? Has Lynch got us dogmatic dinosaurs dead to rights? Not quite, I think. English is dynamic. Still, we can't let the matter drop just there. The notion of language as a bulletin board for faddists needs no new friends. I fear it has too many already.

The relationship between reader and writer is a delicate one, demanding trade-offs. Very well. If we are to talk via the printed page or glassy screen, let's be sure some rules obtain: some sense of where a sentence, once started, should end, and how much of the reader's patience it should tax. Not that here we have the entirety of the thing. What about the writer -- his artistry when it comes to narration, his gift for painting with words, for evoking images? Can't he -- may it please the court -- have a little fun when he talks? How much fun, though? And with what profit, or danger, to his argument?

I'm contending here, not for indifference to those changes that enrich the language like tides transporting riverbed silt. I'm arguing for due attention, on the part of readers and writers alike, to old paths and patterns seen as both right and refreshing. The "pedant" doesn't ransack copy for awkward metaphors and misplaced modifiers, like a grand inquisitor searching out heresies. The "pedant" wants an English paragraph to run smoothly and well, to the joint satisfaction of maker and consumer: partners as they are in the quest for understanding.

The language will change, and that's OK. Once upon a time, "nice" meant silly; now it means agreeable and pleasant. No writer today would throw a casual 17th-century "alack" into the conversation save with ironic intent. "Impact" isn't a verb? I know it's not, but plenty of people unfortunately think it is, to judge by the way they use it. What's a "pedant" to do but shrug and cling a little more closely to other threatened usages?

Various things remain true. Words of a single syllable, carefully aimed, can travel like bullets. A lovely metaphor will linger long in the mind, sometimes humming, sometimes cooing. A writer incapable of coming to the point will look up to see an empty chair where his reader had been sitting. Careless, haphazard syntax can give readers the same impression as garlic breath at a soiree.

There are things the writer can try and get by with, in other words: indeed, more than get by with. There are other things he'd do well to watch with infinite caution, if not repulsion.

Rules? Frameworks? Best practices? You bet we need 'em, not least so we can safely ignore them at precisely the right moment. Next time, dig a hole with a hammer. The point might come clear at last.