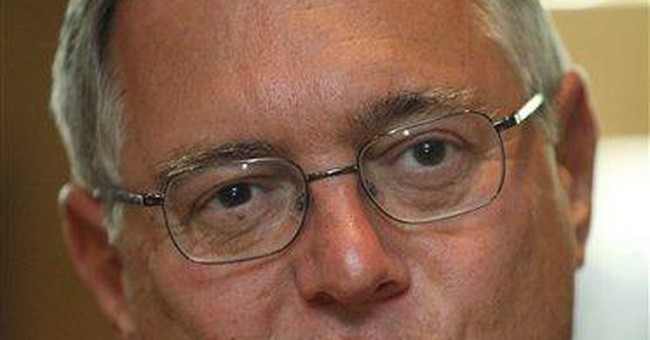 The perceived necessity of a Manhattan Declaration would have jarred the Pilgrims from prayerful contemplation of game birds and the like at harvest festival time, 1621. What -- religious liberty so uncertain a thing as to warrant, five centuries later, a 4,700-word document justifying Christian defense of Christian principles?

Even so. On Nov. 20, a coalition of American religious leaders signed the said "Manhattan Declaration: A Call to Christian Conscience" -- making known their intention not to "compromise their proclamation of the gospel," even unto -- though they hope not -- civil disobedience.

"Unjust laws degrade human beings," say the signers, whose number by the following Monday had swelled from an original 145 to 42,000 (such is the reach of the Internet). "Inasmuch as they can claim no authority beyond sheer human will, they lack any power to bind in conscience." Edicts, rules, attempts of any sort to force observance of non-Christian moral norms -- the signers aren't going to go along, and they think it's as well to let the world know now.

What goes on here anyway? An attempted political cramdown goes on, in the view of the Declaration signers; an uncoordinated yet nevertheless widespread assault on Christian moral values goes on, in the name of secular, politically correct ideals.

"We see [it] … in the effort to … compel pro-life institutions (including religiously affiliated hospitals and clinics) and pro-life physicians, surgeons, nurses and other health care professionals to refer for abortions and, in certain cases, even to perform or participate in abortions. We see it in the use of anti-discrimination statutes to force religious institutions, businesses and service providers of various sorts to comply with activities they judge to be deeply immoral or go out of business.

"After the judicial imposition of 'same-sex marriage' in Massachusetts, for example [Massachusetts -- wasn't that where those Pilgrims lived?] Catholic Charities chose with great reluctance to end its century-long work of helping to place orphaned children in good homes rather than comply with a legal mandate that it place children in same-sex households.

"In New Jersey, after the establishment of a quasi-marital 'civil unions' scheme, a Methodist institution was stripped of its tax exempt status when it declined, as a matter of a religious conscience, to permit a facility it owned and operated to be used for ceremonies blessing homosexual unions. In Canada and some European nations, Christian clergy have been prosecuted for preaching Biblical norms against the practice of homosexuality. New hate-crime laws in America raise the specter of the same practice here."

A related specter rises, to the likely consternation of many who see religious belief as just a set of outdated, sexist, homophobic prejudices. The specter is from the '60s: anti-war protesters shouting, "Hell, no, we won't go!" See what happens when you set a precedent for defiance? Not that the Declaration's framers (scholars, editors, pastors, university and seminary presidents, broadcasters, Roman Catholic bishops and archbishops) need precedent beyond that of their own tradition, which sees the ordinances of the state as less lofty than the commands of God -- cf. Martin Luther King Jr. The declaration reprises Christ's famous reminder that God and Caesar possess very different patches of ground in this world.

A model of clarity and non-squishiness (in an age given to intellectual muddle and the desire Never to Offend), the declaration attacks the presumption and moral vacuity of the pro-choice, anti-traditional marriage agenda. It reminds us, no less usefully, that the supposedly exhausted "culture wars" aren't nearly finished.

One trouble with secularists, and even with some Christians of "progressive" outlook, is a tendency to see moral principles as malleable, changing with elections and regulations. In fact, moral principles -- at least in the normative Christian understanding -- reflect reality: God's handiwork, performed in such a way and not another; one way "right," another way not right at all.

On goes the argument. One thing it does seem progressives shouldn't count on is an Appomattox-like surrender of the opposition. If anything, the opposition strengthens -- to the relief of many, among them the Manhattan Declaration signer who writes these words.