The Return Of Big Government 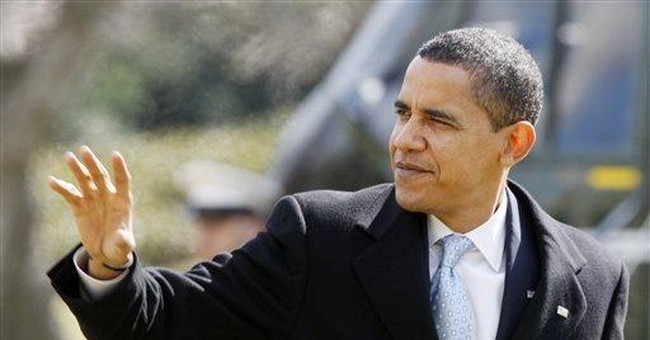 You see? When it comes to public interest and attention during this moment of economic strain, Washington, D.C., the distributor of income, seems easily to outstrip business, the creator of the income marked for distribution. "Seems," I said. A Google search "proves" nothing. It merely suggests what many people are talking about -- such as our national lurch toward central direction.

The present perception is one we might characterize as relief that Congress and the White House have consented to restore happiness and good livin'.

We focus on government, partly because its check-writing authority is so large, partly because, due to that authority, Americans wait longer and more intently than they used to for the federal government to tell them what to do.

My point? Not that government wouldn't receive universal opprobrium for failing to help out; rather, that, as quickly as possible, government should stop helping, and then reverse course. Back to the past! Bigger government than we had, when the Obama administration began, we plainly don't need. In economic affairs, private reliably beats public.

The great myth presently circulating among us, threatening to ossify into reality, is that for the mess we're in we can mainly blame the deregulatory policies of the past couple of decades, along with tax cuts during the Bush years. Such policies (according to the myth-makers) embody the wild and crazy notion that those who create the money in the first place, through investment and work, are entitled to the largest share of it, and that redistribution of resources by government (including money available for bonuses) is a lousy idea.

Repudiating those notions is in large part what the "stimulus" bill is about. Taxes don't get raised for the present, but Congress and the White House create from thin air vast new spending programs that someone has to pay for at some point, through tax increases, inflation, or, likelier, both. Meanwhile, where does the new spending go? Where Congress says it goes, with minimal regard to need or merit: mostly just to the politics of the budget-writers.

True, that's how the politics of spending always has worked. It's more the size the commitment (nearly $800 billion) than the novelty of it that disturbs. Federal spending, which accounts for 21 percent of the national wealth, is headed toward 30 percent. If you like Big Government, you're in luck.

We keep hearing from the Democrats that we have to do things this way because the old "theories" of slow government growth and encouragement of the private sector have been shown up. Why, just look! Indeed, let's look. Among other outrages we see Congress encouraging the reckless provision of home mortgages to people who can't make the payments. We see the Federal Reserve keeping interest rates artificially low, hence subsidizing many of the crazy loans and loan bundles we now complain about. We see new government spending programs (e.g., prescription drugs for Medicare patients) on every hand.

No political party causes an economic smash-up. We know Republicans got drunk on the same punch as everyone else. Beat 'em with a buggy whip in that case. Only let's not mistake Big Government intervention, with the taxes such intervention entails, as the remedy for the failures of, ugh, politicians. One might with equal efficacy prescribe a 10-mile hike for bunion pain.

The immediate challenge is philosophical in nature, not just economic. It is to brush aside criticism from the left concerning bankers, tax cuts, deregulation and such stuff; or else to answer such criticism with the pointed notation that Big Government everywhere -- always -- without exception -- causes more economic problems than it cures.