Homicidal Maniacs On The Loose 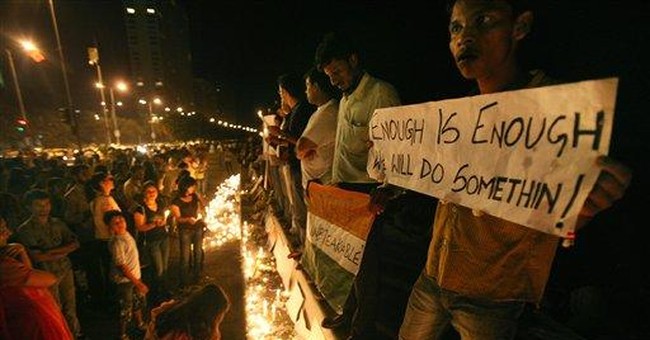 For two or three years running, it seems, all we've heard from the political left in the United States, concerning the war on terror, is: Aren't we awful?

Blog and editorial commentary around presidential election time tilted heavily to the view that it was high time we restored constitutional liberties after their trashing by the George W. Bush administration. We needed to close the Guantanamo holding pen for terrorists, tighten the rules against spying on Americans, renounce disgusting forms of interrogational persuasion (usually labeled torture), and broaden the judicial rights of suspected or accused terrorists.

That was before Mumbai and the fiendish slaughter by Islamic terrorists of nearly 200 unoffending Indians, along with a few foreigners, including an American Jewish couple with, fortunately, an unharmed 2-year-old child.

If the Mumbai bloodbath fails to refocus some American eyes on the complexity and immense risk involved in combating homicidal maniacs, what, frankly, will?

I have grown fond of using the phrase "homicidal maniacs" when discussing terrorists. It's what they are, and if not demented, (meaning deprived of reason, in the way modern psychiatry has taught us to talk), they're morally hollow, which comes to the same thing. They're kindred spirits to Javier Bardem in "No Country for Old Men"; killing machines, without pity or remorse; the diametrical opposites of, shall we say, Jesus, Socrates and the Buddha.

Possibly there's no use laboring the point. How you endeavor to stop mad dogs is the point: not shooting on sight, of course, unless they come foaming around the corner, but, rather, to begin with taking them as seriously as they take their potential victims.

I'm not sure the Western left is ready for that crucial step. Its legions would rather shred Bush. Not to mention Vice President Cheney, whom various left-wing types hope they can indict for God knows what after he leaves office, as punishment for helping keep us safe.

It seems to have escaped general notice in recent years that the United States hasn't been subjected to a single terrorist attack since 9/11. For which there are likely various reasons: among them, the lack of a substantial radicalized domestic community into which terrorists can blend. We're not Baghdad. We're not even Mumbai or Jakarta. We're Dallas and Chicago and Casper, Wyo. You can't pull the stuff in places like this that you pull abroad.

But surely much of the credit for our thus-far-clean record of public safety is owing to stringent federal measures to catch or head off terrorists: domestic surveillance included; Guantanamo included; the Patriot Act included; conceivably even water boarding. (As if the momentary terrorizing of a terrorist, for the sake of prospectively vital information could offset the prospect of preserving American lives and property!)

Mumbai reminds us that terrorists aren't idealists, they're barely identifiable as human; it reminds us, further, that heading them off is a proposition more urgent than cleaning up after them. Clearly a civilized nation, which we still were, the last time I looked, shouldn't and won't insert bamboo slivers under fingernails to extract The Truth. That nation has a right anyway to snoop effectively in order to protect even ACLU members against threats of mayhem and massacre.

The Western left gives lip service to the idea of self-defense without acknowledging the danger of defending too little or too lethargically -- the very danger that the Mumbai massacres exemplify. It's an old syndrome of the left, seen back in the '60s in the context of inner-city crime and Vietnam protest. It begins with figuring that the disrupters of order enjoy at least some marginal entitlement to understanding, "victims" as they are of "society." Normally those who thus argue usually live in safe neighborhoods -- the United States, for example.

One thing's sure: No such neighborhoods can remain safe unless constantly and efficiently patrolled by the forces of law and order so as to exclude the entrepreneurial mass murderer. We're the good guys, comparatively speaking. They're the miserably, exquisitely bad guys. Why do so many Western liberals have so hard a time with that simple, undeniable proposition?