The Party Of Happiness 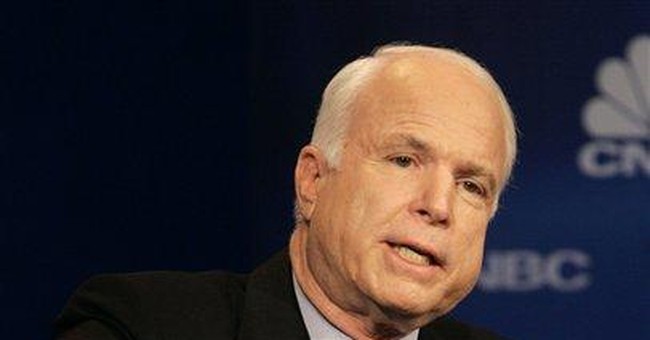 Oh, all right. The Republican party didn't manage to sell Americans on the need to elect John McCain as their maximum leader. Forget the small stuff: Republicans are happier people than Democrats. We have it on reliable authority, that of the non-partisan Pew Research Center. I invite fellow McCain voters to put aside their melancholia of the moment to wallow in the good news.

A Pew poll taken in October -- yes, during the "market meltdown," as the media so helpfully kept labeling it -- found that 37 percent of Republicans are "very happy" with their lives, contrasted with a mere 25 percent of Democrats. Pew says that although the happiness gap, as evidenced in polls, dates back to 1972, "the current gap is among the largest on record."

What is with us anyway? Wiped out and stomped on, we somehow smile. It is a bit like St. Paul, writing to the Corinthians -- "as chastened, and not killed; as sorrowful, yet always rejoicing." Or like Dr. Johnson's schoolboy pal who, as Boswell relates, threw over his desire to become a philosopher on finding that "cheerfulness was always breaking in." It must be dispositional.

Is money the crucial factor -- Republicans, overall, having more of it than Democrats? How, in that case, to explain Warren Buffet, George Soros and the hedge fund managers, software developers and TV stars who impale landscaped front lawns in high-property-tax neighborhoods with Democratic signs? How to explain Republicans who drive to the polls in 15-year-old automobiles and clip $5-off restaurant coupons? How to explain upper income buoyancy in light of Democratic pledges to take their money and pass it around the table?

Pew acknowledges that by one regression model for poll analysis, a high-income person has a 16 percent greater shot at happiness than does a low-income person. Yet observe. When one controls all demographic variables -- age, ethnicity, race, gender, income, marital status and education -- a Republican is 13 percent more likely than a Democrat to be "very happy." It isn't just money.

Pew plows on. Health and church attendance matter considerably in the happiness configuration. A Pew study last February indicated that, whereas 37 percent of Republicans pronounced themselves in excellent health, just 25 percent of Democrats did.

As for religious commitment, Republicans go to church more regularly than Democrats. Notes the Pew Center: "[S]omeone who attends religious services weekly or more often has an 18 percent better chance of being very happy than someone who attends services seldom or never." Possibly there's nothing like a tactile connection to the divine, or the assurance that this present market-ravaged, election-losing life isn't the end.

Pew didn't ask the question I really wanted put to respondents: Namely, do Democrats have as much sense of humor as Republicans -- humor, as opposed to delight in base ridicule? Evidence is to the contrary; still, it would be nice some day to know.

For now, let us McCain voters step back. Let us acknowledge the need -- yea, the right -- of Democrats to whoop it up, happy and contented as any garden-variety Republican, for having put down evil and degeneracy. At some risk to their party, be it noted. The happier the Democrats find themselves, the greater the risk for the partisan future. What if Democrats, like Republicans, should start making friends and money -- even turning up at church on Sundays?

A word of caution to Democratic overlords: Don't let the faithful get too happy. Next go round, they might just cast their joyous lot with the Grand Old Party.