Zimbabwe And The Liberal Mind 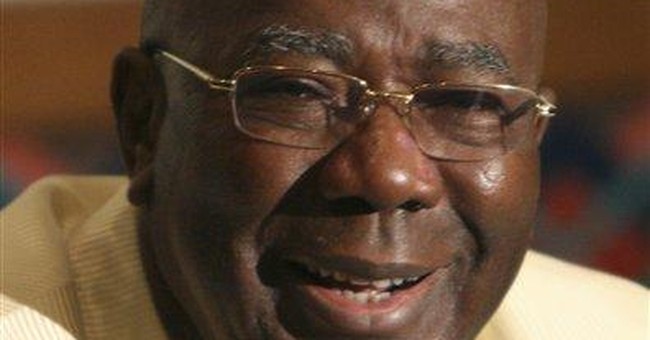 For decades the rap, as administered by good Western liberals, had an eerie sameness: Imperialists bad; freedom fighters, good. Out of there, you smug, gold-laced Churchillian types with your topees and your gin and tonics. Out of India! Out of Africa! Out! Out!

Nor did American liberals alone make up the chorus. Plenty of Brits declaimed against their overseas fiefdoms. Worn-down Frenchmen and Dutchmen called for withdrawal from the plains and jungles of empire. Empire, as we'd say nowadays, was so over. The glorious dawn of independence was at hand, bathing in its lustrous rays well, for Robert Mugabe, among others.

Robert Mugabe: exalted oppressor of the Zimbabwean people, jailer of opponents, suppressor of every human right known to man and then some. Robert Mugabe, all-round tyrant, despot and jerk, as well as unwitting generator of a certain nostalgia for the bad old days of topees and gin and tonics.

Maybe, after all, we think, watching Zimbabwe's plunge into the Dark Ages, amid economic ruination and the shutdown of civil liberties, black isn't automatically the color of virtue, nor white the color of viciousness. Maybe the old empires, which certainly had their demerits, had, as well, some good points. For one thing, they'd allow you a fair trial.

Western liberal antipathy for empire and, at one time, the white-ruled relics of empire -- e.g., South Africa and Rhodesia -- never had much discernment about it. The supposition was that when the colonial masters got kicked out, or left of their own accord, native successors to power would initiate the reign of freedom and justice and love. It's been, here and there, a little messier than that, a little rockier.

Zimbabwe isn't the only example, but it's a good one. After Britain, the former colonial authority in Rhodesia helped peel power away from Ian Smith's rebel white regime, and Robert Mugabe governed for a time with some success. Then he decided to become president for life. Autocracy descended, as did hunger and imprisonment. He seized the productive farmlands of the country's then-numerous whites. Racial mythology protected him. He was black and, as the New York Times called him this week, "a revered liberation hero." The whites were, well, white.

Not that whites were Mugabe's most conspicuous victims; blacks were, too -- blacks like himself. Whites had the money and motive to flee; not so the blacks he had killed or thrown in prison, or whom he shut out of power for demanding what had been represented to them as their lawful human rights.

White liberals abroad kept largely quiet. It was so embarrassing: A black oppressing blacks! and, with the implied acquiescence of other black African leaders happy to cut some slack for a revered liberation hero. Until now, that is. Now, when widely acknowledged as the author of all Zimbabwe's problems -- including an inflation rate of [SET ITALS] 2 million [END ITALS] percent -- and the brazen theft of the most recent presidential election -- Mugabe seems to be wearing out his international welcome.

Kenyan President Raila Odinga calls recent developments in Zimbabwe "a shame and an embarrassment to Africa in the eyes of the international community." He calls on the African Union "to send troops to Zimbabwe" and restore order and justice.

A good idea, one would think. There's one more good idea. It's to cut the racial component out of political discourse. If we're all for freedom and justice -- we are, aren't we? -- it hardly makes sense to judge in racial terms, and racial terms alone, the bona fides of this or that government, this or that ruler. We're past that, aren't we? Or where would Barack Obama stand in the electoral pecking order?

Of course, old habits die hard. A Western liberal prone to excusing revered liberation heroes on the slightest grounds doesn't automatically abandon the habit -- the habit that goes with sliming and slandering white "imperialists." Not rational. Not useful in the full securing of human rights. But soWestern liberal, don't you know?