The Crawdad Diplomacy of Joe Biden

Bill Addington
|
Posted: Mar 02, 2022 12:01 AM
Share   Tweet
The opinions expressed by columnists are their own and do not necessarily represent the views of Townhall.com. 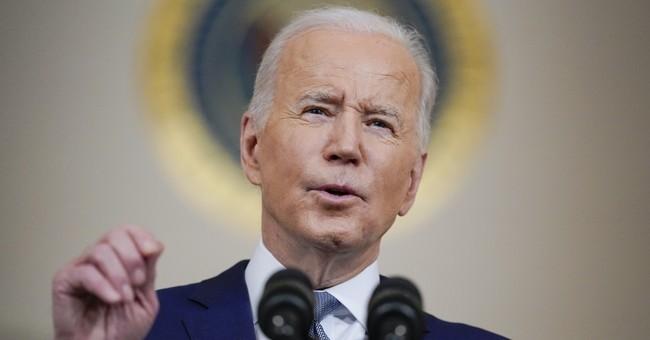 When I was a kid, growing up in the foothills of the Appalachians, one of our pastimes was crawdad hunting.  It usually happened when the weather was scorching hot and contrary to popular belief it gets hot and humid in the mountains.  Once there weren't enough kids around to play stickball, or our bikes were down for repairs, the creek beckoned.  Mom and Dad warned us time and again to stay out of the creek, but keeping an eye on me and my brother was a full-time job in and of itself.  Growing up out in the country certainly had it's advantages, and one of those was that our parents were usually busy scratching out a living and us younguns were expected to stay out of trouble - or at least get ourselves outta whatever situation we found ourselves in, all by our little lonesomes.  And the creek was close, and cool and oh so tempting.

Crawdads are a mystery to young kids, and my brother and I were no exceptions.  Who could resist wading barefoot thru sparkling cold water, turning over rocks and watching for the telltale trail of muddy water when a crawdad darted off to a safer haven, or a least one out of momentary arms reach of us kids.

Crawdads, for those of you underprivileged, use their tails to propel themselves backward thru the water when spooked.  If they are left alone, sometimes you'll see them slowly meandering thru the water at the bottom of a stream, claws displayed and ready to clamp down on any unsuspecting insects or tiny fish spawn or any dead organic matter they happen to encounter. They don't really seem to hunt per se, just sort of laze around waiting for something juicy to float by.

When confronted by what to them must resemble a giant two-legged alien bully, they tend to react just like the Biden administration. They swell up indignantly and wave their menacing little claws at anything that moves.  Then at the first opportunity, they pull their tail up between their legs and use it to quickly - almost violently - dart backward away from the perceived threat, just like the Biden administration does.  It embarrasses me to see America exhibit such behavior, especially on the world stage, but that's exactly what we get when Joe Biden is running things.

Joe (I prefer not to call him Mr. President) talks himself up into what he evidently thinks is a menacing figure, waves his claws around, then turns tail and runs at the first opportunity.  He will loudly proclaim he's ready to take you out behind the barn, but anyone willing to accept his boisterous challenge would have a long wait for ole Joe to show.  If he eventually did appear, he'd likely wave his arms around, drop a few juicy "dog-faced pony soldier" zingers, then suddenly remember it's tapioca night and disappear quicker than a fart in a tornado, telling everyone who will listen what he would have done if he hadn't heard Doctor Jill calling him home for dinner.  Well, Joe, all your bluffing and blustering ain't worth the air it takes to blow you off your paper stage across the street from the White House.  The world sees you Joe, and knows you for what you really are; a pitiful little crawdad, with one claw slightly larger than the other, and absolutely no will to stand and fight - for honor, God or country. Especially when there's an open escape route to your 6 o'clock. The only thing missing is the muddy trail left behind, but perhaps there is one and the press willfully ignores it.

It's been a few years since I had the hankering to walk barefoot thru a mountain stream.  I'd be more likely to catch some virulent strain of toxicity than come across a crawdad anyway.  Or cut my foot on broken glass or one of the many aluminum cans that litter the creekbed and seem to propagate themselves at each and every opportunity. So I finally follow my parents' advice and stay outta the creek.  But I'll never forget those days, and while the crawdads aren't the mystery they once were, seems I can still learn a few things from them, even at my advanced age.  So Joe, beware the two-legged bully who flips over your rock.  At some point, you'll run outta places to hide.  And just like the crawdads of old, you'll end up in somebody's glass jar with everyone staring, pointing and laughing at how ridiculous you look.