Medicaid at the 'Tipping Point'

Betsy McCaughey
|
Posted: Jun 28, 2017 12:01 AM
Share   Tweet
The opinions expressed by columnists are their own and do not necessarily represent the views of Townhall.com. 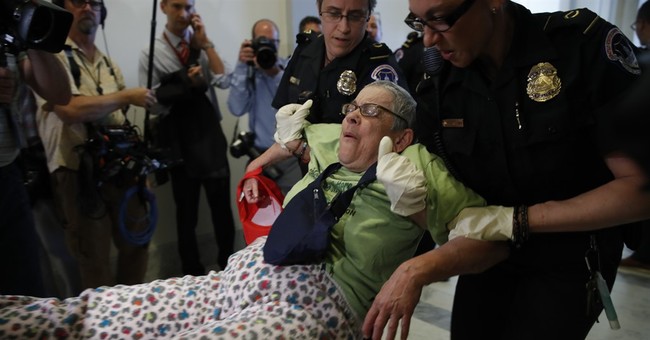 Former President Barack Obama is joining the demagogic slugfest against the GOP's latest bill to repeal and replace Obamacare. He claims the bill would "ruin Medicaid."

Not so fast, Obama. Your health care law ruined Medicaid. Now, about half of all women who give birth in the United States are on Medicaid, a staggering figure.

Medicaid was created in 1965 as a safety net for the poor. But Obamacare distorted it, edging the U.S. closer to a Medicaid-for-all or single-payer system. Swelling the Medicaid rolls -- not making private insurance affordable -- is the main way Obamacare dealt with the uninsured.

Almost 75 million people are now enrolled, 20 million more than in Medicare, the program for the elderly. If the repeal bill doesn't pass, Medicaid enrollment will soar to 86 million by 2026, according to a Congressional Budget Office analysis released Monday.

Who's picking up the tab for this vast Medicaid expansion? You. Worse, you pay twice -- once as a taxpayer, and then again as an insurance consumer. Families with private insurance pay $1,500 to $2,000 or more in added premiums yearly already to keep Medicaid afloat. The more Medicaid expands, the higher their premiums will go. That's because Medicaid shortchanges hospitals and doctors, paying less than the actual cost of care. They make up for it by shifting the costs onto privately insured patients. Ouch.

That cost shifting only works until Medicaid enrollment grows too large. The Mayo Clinic warned three months ago that Medicaid enrollment has reached the tipping point. The renowned clinic announced it will have to turn away some Medicaid patients or put them at the back of the line, behind patients with commercial insurance.

Years earlier, when Obamacare was still being debated in Congress, the dean and CEO of Johns Hopkins Medicine, Dr. Edward Miller, issued a similar warning: Allowing a vast expansion of Medicaid could have "catastrophic effects" at places like Hopkins.

His dire prediction came true. Obamacare loosened Medicaid eligibility rules and urged states to enroll as many people as possible, with Uncle Sam paying 100 percent of the tab until 2016 and 90 percent or more thereafter.

Medicaid enrollment spiked in many states, including New York, where it skyrocketed up by a third to 6.3 million. Blame the incentive to rake in federal dollars.

And waste money. Roughly 10.5 percent of Medicaid payments are in error. Any company with that record would be out of business.

The Republican bill will reform Medicaid in the nick of time. It will curb the explosive growth in enrollment, though no one currently on Medicaid will have their coverage ripped away; they will be grandfathered in.

Unless the enrollment explosion is halted, health care institutions across the country will reach the same dire conclusion as Mayo and begin turning away patients with government insurance.

Repeal would also slow the growth in federal Medicaid spending. Democrats label that change as "cuts" and predict doom, but in fact, the bill promotes smarter spending.

States could opt to receive a block grant, or a fixed amount per Medicaid enrollee, ending the perverse incentive to spend more just to pull in federal dollars. The idea is to promote efficiencies. Florida -- hardly a backwater -- currently spends less than half what New York spends per Medicaid recipient, which is proof it can be done.

Democrats assailing the repeal bill as "heartless" and "mean" and tarring the GOP as the "death party" need to stop the demagoguery and get serious. There is no time to spare in reforming Medicaid.

It's at the tipping point.