Bethany Blankley
|
Posted: Dec 17, 2016 12:01 AM
Share   Tweet
The opinions expressed by columnists are their own and do not necessarily represent the views of Townhall.com. 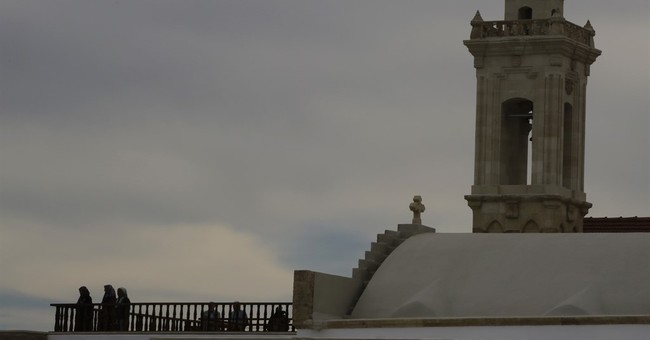 Prominent Southern Baptist leaders argue that Russell Moore, president of the Ethics & Religious Liberty Commission (ERLC), the “moral and public policy arm” of the Southern Baptist Convention (SBC), should no longer be on the SBC’s payroll. For years his consistent commitment to divisiveness has now moved beyond being “out of touch” with the ERLC’s constituency, to being out of touch with reality.

Historically, his divisive remarks have excluded mentioning the Gospel or why Christians engage in public life. (Who can forget his endorsement of Marco Rubio while disparaging Sen. Ted Cruz, Jerry Falwell, and Donald Trump?) Overall, many regarded his statements as disingenuous annoyances.

But now, by promoting a false equivalence between Christians and violence— Moore has proven that he is a danger to Christianity itself.

Part of this danger involves his failure to acknowledge or offer a “moral and public policy” initiative to a very real problem Christians experience on a daily basis. Namely: the violence that is primarily committed against individual Christians, their family members, and specifically pastors and their congregants.

Moore’s most recent “straw man” babble about Christians and violence is not supported by a single fact. He said, “the cultural Christianity around me seemed increasingly artificial and cynical and even violent. I saw some Christians who preached against profanity use jarring racial epithets. I saw a cultural Christianity that preached hellfire and brimstone about sexual immorality and cultural decadence.”

The only two examples he offers to support this vague claim include one man who while committing adultery (not Bill Clinton) sang at church, and one pastor who allegedly used a racial epithet.

Moore fails to mention the false preachers and political activists (Jesse Jackson, Al Sharpton, among others) who’ve made millions from inciting violence.

He fails to mention the self-described “Queer Islamist Christian pastor” who helped organize the Black Lives Matter protest “to create a ‘safe space’ for rage” in Dallas. That safe space became the single most deadly incident for U.S. law enforcement since 9/11.

Moore repeatedly evidences his failure to understand the biblical purpose of government—to restrain evil and create human flourishing. Killing children, destabilizing families, increasing children’s vulnerabilities to predators, maintaining the status quo of corruption at all levels of government, and pursuing reckless spending to enslave and make Americans poorer—are all issues the Bible clearly mandates Christians eradicate and replace with justice. Yet Moore criticizes what he calls the “Religious Right” for their efforts to restrain evil, and ignores the evildoers. No society in history has ever survived, let alone flourished, by killing its own children or accruing unsustainable debt. Not one. They all failed.

In 2016, the “Religious Right” did not pay protesters $15-20/hr. to commit burglary or arson of professional and personal property, disrupt public transportation, stop traffic, attack the elderly, or enable people to use false identification and fraudulently vote multiple times. None in the “Religious Right” have ever advocated that Christians “have the RIGHT to take property from FILTHY non-Christians and Jews.”

None are encouraging their followers to murder police or to decapitate anyone who disagrees with them. None are doggedly pursuing ways to put Christians out of business or send them to prison because they disagree with them or reject Christianity.

specifically and solely against Christians. Christians are losing their livelihoods, their schools, and in some cases their loved ones— and are being arrested, fined, and illegally jailed because of their faith. This isn’t just happening in Iran or China. It’s happening in 2016 America.

Perhaps the SBC should heed the wisdom offered by two of its former leaders. Former Governor Mike Huckabee, who was educated at two Southern Baptist institutions, pastored two Southern Baptist churches, and served as president of the Arkansas Baptist Convention, wrote in an email:

“I am utterly stunned that Russell Moore is being paid by Southern Baptists to insult them.  Many of us have faithfully sought to stand for the Biblical definition of marriage, for the sanctity of life, and for meaningful and substantive efforts to help the poor with affordable housing, access to food and employment, and equal education opportunities for minorities.  Where was Russell Moore when we were fighting those battles?

“Who is he to dismiss the efforts by great men of God like Adrian Rogers, Jimmy Draper, Bailey Smith, Jerry Vines, Ronnie Floyd, Jack Graham, Ed Young, Morris Chapman, Charles Stanley, Frank Page, Paige Patterson, and many other people I’ve personally known to be fearless and faithful servants of Christ as they helped lead Southern Baptists to take the Bible literally and seriously?

"If issues like the protection of the unborn, Biblical marriage, or helping people out of poverty rather than enslaving them to government programs that keep them impoverished for life aren’t important to Mr. Moore, then he should show some integrity and stop taking a paycheck funded by the very people he holds in such contempt."

And SBC’s former convention leader and committee chairman, Bill Harrell, wrote that unless the ERLC can “stop exhibiting the attitudes it has been displaying and unless it can stop taking stances on issues that the people of the SBC don’t hold, and unless it can cease to be a divisive force among our people… It’s Time to Call it a Day.”

Today is that day. Christians in America have had enough of Russell Moore claiming that he speaks for them or is even relevant to any discussions pertaining to morality and ethics.

While Christians continue to lose their jobs because of their faith, Moore gets paid to use his position to publicly harm Christianity. Could anything be more unethical or morally reprehensible?