Bernard Goldberg
|
Posted: Apr 17, 2018 12:01 AM
Share   Tweet
The opinions expressed by columnists are their own and do not necessarily represent the views of Townhall.com. 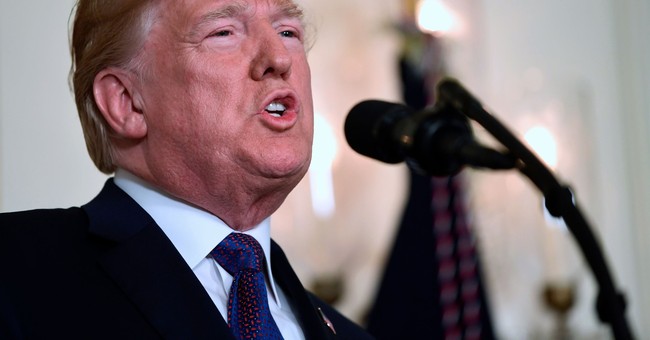 Paul Ryan, the GOP leader in the House, says he won't run for re-election -- the latest warning sign that a blue wave may be coming in November.

It's one thing to be the speaker of the House, with all the power that comes with the position; quite another to be in the minority. And if Ryan thinks the midterms will leave him in the wilderness, why stick around Washington?

It's a question a lot of Republicans have been asking. Ryan is the most prominent Republican who'll be leaving, his decision the most consequential; but more than 40 other House Republicans have said they're also calling it quits, some expressing "intense dissatisfaction with the state of Washington under Mr. Trump," according to The New York Times.

A recent Gallup poll puts the president's approval at just 41 percent -- with a majority of those polled, 54 percent, saying they disapprove of the president.

The president's most loyal fans may think, as they always do, that the polls are rigged, that they're just fake news. But those not under the spell of this president are taking the numbers seriously.

And that same Gallup poll shows a partisan divide of Grand Canyon proportions. Only 8 percent of Democrats approve of the job the president is doing, while a whopping 89 percent of Republicans are still solidly in his corner -- an exceptionally high number given the daily chaos emanating from this administration, much of it Donald Trump's own doing.

Some of that support, of course, is tribal, rooting for the captain of your team. But with Donald Trump something else is going on.

He's not only getting backing from people who like him. I suspect he's also getting support, unintentional for sure, from progressives who loathe him -- because a lot of them are angry, resentful and at times unhinged, traits that don't sit well with ordinary Americans. Before this is over, the angry left just might turn out to be an unlikely bonus for the president's party this fall.

Here's an idea for Republicans rightly worried about the midterms: Launch a well-produced ad campaign around the idea that if voters want to live in a country controlled by progressive Democrats, think about what that country would look like.

Let's start with impeachment. If Democrats take over the House, there's a good chance it won't be long before the president is impeached.

The GOP ad might ask: Impeachment for what? For obstruction of justice or collusion with the Russians? Unless the special prosecutor comes up with some hard evidence, independents -- the group Republicans will need to hold onto Congress -- will see impeachment as nothing more than a left-wing coup.

The GOP ad should hammer that message hard -- and ask voters if they really want Nancy Pelosi running the House.

But it's not only the important matters of consequence like supposed Russian collusion that could determine which party winds up in control of Congress next year. It's also a lot of small things that could count, too.

Things like trying to shut down conservative voices progressive Democrats don't want to hear. Whether it's encouraging advertisers to boycott Fox programs because of an ill-advised Laura Ingraham tweet, or cupcakes on campus shouting down conservative speakers. These tactics don't go over well with reasonable Americans.

Little things like that snarky New York magazine cover portraying President Trump as a pig. The pig cover won't bother progressives in Manhattan, of course, but they sell the magazine in newsstands at airports where Middle Americans see it. And even if some of them don't especially like the president, there's a good chance they won't like the disrespect even more.

And there's the grating nonsense from progressives about white privilege. Republicans should make commercials asking: How are white blue-collar workers in the Rust Belt privileged? How is a white woman trying to make ends meet as a waitress in a small-town diner privileged?

And is Donald Trump really a bigot who "wants to make America white again" because he wants to build a wall along our southern border?

The strong economy may help Republicans in November, but the midterms are likely to come down to enthusiasm. Which side has more: Those who detest the president or those who are sticking with him?

Candidate Trump ran against the elite media to his advantage. Republicans this fall can run against an elite progressive culture to their advantage.

But if between now and November the president fires Jeff Sessions, his deputy or the special counsel, then ignore everything you just read.