Bernard Goldberg
|
Posted: Sep 05, 2017 12:01 AM
Share   Tweet
The opinions expressed by columnists are their own and do not necessarily represent the views of Townhall.com. 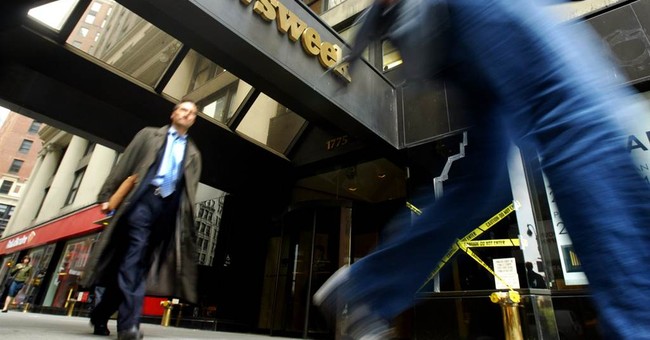 It was the fifth season of the sitcom "Happy Days" and producers figured they needed something to boost the show's sagging ratings. So they had the gang leave industrial, blue-collar Milwaukee and head to Southern California, where everybody is beautiful and the sun always shines. And on Sept. 20, 1977 Arthur Herbert Fonzarelli, better known to his pals simply as Fonzie, put on a pair of water skis, hopped into the Pacific Ocean and jumped over a shark.

"The idiom 'jumping the shark' is pejorative," Wikipedia tells us, "most commonly used in reference to gimmicks for promoting entertainment outlets, such as a television series, that are declining in popularity."

Or a news magazine that almost nobody reads or pays attention to anymore.

A few weeks ago, and 40 years after Fonzie jumped the shark, Newsweek came up with its own cheesy gimmick in an attempt to stay relevant.

Abandoning any pretense of grown-up journalism, Newsweek plastered the words "Lazy Boy" on its cover with an illustration of President Trump sitting in a recliner covered in junk food.

Recliner. Lazy Boy. Get it?

He's covered in Cheetos and has a bag of McDonalds on his lap. He's got a Diet Coke in one hand and a TV remote in the other.

The words on the cover read: "Donald Trump is bored and tired. Imagine how bad he'd feel if he did any work."

Once upon a time, Newsweek was a serious news magazine whose editors would not allow their publication to resemble a comic book.

In 2001, when my book "Bias" came out, my focus was on liberal bias in the news and the refusal of mainstream journalists to either acknowledge its existence or try to tone it down.

But now bias is my second biggest journalistic concern. Arrogance is now No. 1. The snobbery of too many journalists is beyond annoying. It's repulsive.

While President Trump was speaking at a rally in West Virginia not long ago, Rothenberg took to Twitter to let everyone know that "Lots of people in West Virginia can't support themselves or speak English."

Look up the words "elite snob" in the dictionary and you'll find a picture of Stuart Rothenberg.

But as John Nolte reported on the Daily Wire: "According to a report dated April 2017 from the Department of Education, Rothenberg is lying. While the national high school graduation rate is 83 percent, West Virginia's graduation rate sits at an impressive 87 percent, which elevates it well above such cherished left-wing states as California (82 percent), New York (79 percent), Washington (78 percent), Oregon (74 percent), Minnesota (82 percent), Rhode Island (83 percent), and Rothenberg's precious Washington DC (69 percent)."

And finally, this from the sophisticated Rothenberg: "Of course they are hard-working. They mean well. Just close-minded, provincial, angry & easily misled."

If elitism and arrogance were crimes, Rothenberg would be behind bars doing 25 to life.

And imagine for a moment that Trump had held that rally in Texas instead of West Virginia. You just know that Rothenberg would be looking down his elitist nose at them too -- and tweeting about how "easily misled" they were. After all, a lot of Texans voted for Donald Trump.

Except these past few days we all saw what ordinary blue-collar Americans are capable of, what they do for each other in times of crisis. You think Rothenberg, before Harvey hit, would also have called them "close-minded and provincial" as he did the Trump supporters in West Virginia? Good chance!

None of those Texans, who are routinely ridiculed by liberals both in and out of the media, cared about race or ethnicity or whether someone was gay or straight; all that mattered was if they needed help.

I wonder if Rothenberg learned anything about the kind of people he apparently finds "provincial" from those images we saw coming out of Texas.

So here's a memo to Stuart Rothenberg and the sophisticates at Newsweek: At least when Fonzi jumped the shark it was kind of funny.