Bernard Goldberg
|
Posted: Jun 20, 2017 12:01 AM
Share   Tweet
The opinions expressed by columnists are their own and do not necessarily represent the views of Townhall.com. 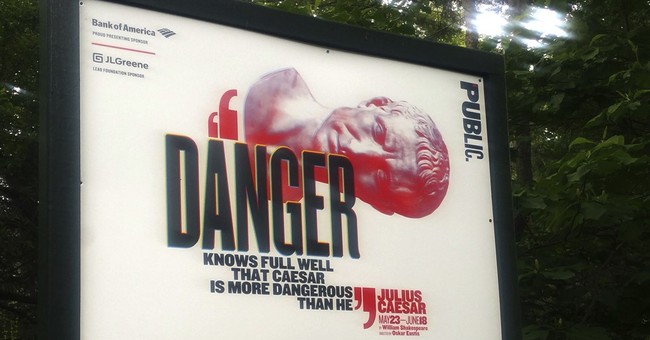 In 2011, after a severely mentally ill young man in Tucson, Arizona shot Democratic Congresswoman Gabby Giffords, wounded almost 20 more, and killed six, including a 9-year-old girl, it took the liberal media elite a nanosecond to pin the crime on -- who else? -- conservative Republicans and their supposed "toxic rhetoric."

While police were still scouring the crime scene, Paul Krugman, The New York Times hard-left columnist wrote: "Where's that toxic rhetoric coming from? Let's not make a false pretense of balance: it's coming, overwhelmingly, from the right."

An editorial in the Times also pinned the Tucson violence on Republicans: "It is facile and mistaken to attribute this particular madman's act directly to Republicans or Tea Party members. But it is legitimate to hold Republicans and particularly their most virulent supporters in the media responsible for the gale of anger that has produced the vast majority of these threats, setting the nation on edge."

Reporter Matt Bai wrote in the Times that conservatives who use words like "tyranny" to describe politicians shouldn't be "blind to the idea that Americans legitimately faced with either enemy would almost certainly take up arms."

In Politico, Michael Kinsley, a quasi intellectual of the progressive left, wrote that, "The suggestion, finally, is that the right is largely responsible for a political atmosphere in which extreme thoughts are more likely to take root and flower."

They blamed Glenn Beck and Bill O'Reilly and Fox News in general and Sarah Palin in particular. Never mind that the gunman was mentally ill -- and not just a little bit. Never mind that there was not a shred of evidence that he ever heard the name Sarah Palin or any of the others. That, to elite media liberals, was irrelevant. The only point they cared about was linking conservatives to a crime committed by a mentally unstable young man.

Now it's 2017 and we have the shooting on the baseball field. And we have lots of people on both sides saying it's time to tone down the rhetoric.

Sounds good. But before we attempt that, a few questions are worth asking:

Where were the liberal elites when Madonna said she wanted to burn down the White House?

Where were the liberal elites when so-called progressives took to the streets with their signs that said Donald Trump was Adolf Hitler?

Where were the liberal elites when Democrats said Trump was not a legitimate president and that he was a threat to the United States of America?

Where were they when Maxine Waters, the progressive Democratic congresswoman from California, said Trump's cabinet was composed of "scumbags"?

Where were they when progressives said Republican policies would, as Mollie Hemingway writes in the Federalist "destroy the planet, enslave women, or kill sick people"?

Where were they, Hemingway asks, when mainstream media outlets routinely imply that the president of the United States is a "Russian stooge committing treason, or simply suggest that he needs to be removed from his duly elected office by whatever means."

Yes, the liberals along with conservatives were there when Kathy Griffin figured that given the nonstop barrage aimed at President Trump she could safely and without consequence take a picture of herself holding a bloody decapitated head of you-know-who in her hand.

But where were the liberal elites when progressives decided it was just the right time to stage "Julius Caesar" in New York's Central Park with the lead character resembling none other than Donald Trump -- who is stabbed to death on stage.

Oh, the liberals loved that one. Besides, they said, the assassination of Caesar (or Trump) shows "the disastrous effects of violence" as one liberal supporter of the play put it.

I'm sure they'd say the same thing if conservatives staged "Julius Caesar" starring a Barack Obama lookalike. I'm sure they'd brush off the assassination scene, once again, as much ado about nothing.

Let's be clear: The producers of "Julius Caesar" aren't responsible for the shooting on the baseball field; neither are Madonna or Maxine Waters or the progressives who believe Trump is Hitler or liberals who think he's not a legitimate president.

But the man who is responsible, James Hodgkinson, wasn't a raving lunatic like the killer in Tucson. He was a politically savvy anti-Trump zealot who hated Republicans and loved Bernie Sanders and Rachel Maddow and more than a few more progressive media elites. And, no, they're not responsible for the shooting, either.

But before we go to the surefire "both sides must tone down the rhetoric" routine -- something, by the way, that won't last long if history is any indication -- let's be as clear as the liberal media elite were in 2011. While hard-right Republicans have crossed the rhetorical line more than a few times, much of the angry rhetoric today is coming from liberals and progressives. They are the ones who are creating an atmosphere where something horrible could, and did, happen.

To change just one word in Paul Krugman's column right after the Tucson massacre: The suggestion, finally, is that the (SET ITAL) left (END ITAL) is largely responsible for a political atmosphere in which extreme thoughts are more likely to take root and flower.

Only the gunman is responsible for what happened last week in Virginia. But it's not only time for the crazies on the left to tone down the rhetoric; it's way past time for the liberal media elite to hold their fellow progressives as accountable in 2017 as they held conservatives in 2011 -- for a crime they had nothing to do with.