Bernard Goldberg
|
Posted: Jan 24, 2017 12:01 AM
Share   Tweet
The opinions expressed by columnists are their own and do not necessarily represent the views of Townhall.com. 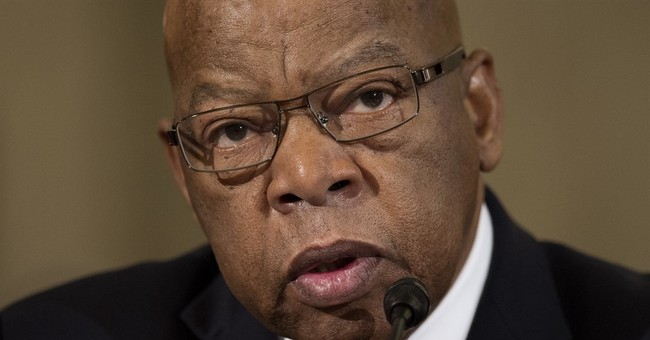 Before the inauguration is just a distant dot in the rear view mirror, let's not forget the movement Congressman John Lewis led -- the movement that encouraged a large number of liberal House Democrats to boycott the big day in Washington.

Let's not forget it because it tells us something important about the people we elevate to hero status: that given enough time, even icons can become tedious. And, sadly, Congressman John Lewis has.

Lewis was a genuine civil rights hero who earned his stripes on March 7, 1965, a day that has come to be known, for good reason, as Bloody Sunday. A close ally of Martin Luther King Jr., he helped organize the now historic march from Selma to Montgomery. As Lewis and 600 others crossed the Edmund Pettus Bridge that day, Alabama state troopers were waiting. And when the marchers stopped to pray, police on horses charged -- and beat them with nightsticks. One of the troopers hit Lewis in the head and fractured his skull. He was a courageous man whose efforts made America a better place, and not only for African Americans.

But even heroes have to be held accountable. And over the years, John Lewis the civil rights icon has become a hyperpartisan liberal Democrat who, absent his biography, would be seen more clearly as just that.

Now, he's in the news because he says Donald Trump is not a legitimate president. That he lost his legitimacy because, in Congressman Lewis' view, the Russians helped him win.

So apparently was John McCain. In 2008, the congressman compared Senator McCain to Alabama's segregationist governor, George Wallace. "What I am seeing reminds me too much of another destructive period in American history. Sen. McCain and Gov. Palin are sowing the seeds of hatred and division, and there is no need for this hostility in our political discourse. George Wallace never threw a bomb. He never fired a gun, but he created the climate and the conditions that encouraged vicious attacks against innocent Americans who were simply trying to exercise their constitutional rights. Because of this atmosphere of hate, four little girls were killed on Sunday morning when a church was bombed in Birmingham, Alabama."

In 2012, Lewis played the race card again, this time against Mitt Romney, suggesting that if he were elected president, America would go back to the bad old days of segregation.

Speaking at the Democratic National Convention, Congressman Lewis said: "I've seen this before, I lived this before. We were met by an angry mob that beat us and left us lying in a pool of blood. Brothers and sisters, do you want to go back?"

What reasonable person could possibly believe that if Mitt Romney won, America would "go back" to the days of George Wallace and Selma?

Congressman Lewis, to state the obvious, has every right to think whatever he wants, but even for those of us who believe deeply in civil rights, it's getting tiresome.

John Lewis doesn't seem to understand that not every Republican he opposes is George Wallace, who for the record was a Democrat. Lewis sounds like the old guy on the porch or at the barbershop who keeps telling the same story over and over again about the old days, the glory days, not realizing how sad and boring he's become.

And CNN journalist Anderson Cooper noticed what most others in his profession didn't, or didn't have the nerve to say out loud. "I get he doesn't like Donald Trump," Cooper said. "I get he doesn't accept the results of the election, but is this helpful in any way? ... If a Republican had said this about President-elect Hillary Clinton, Democrats would be up in arms."

But they're not. And neither is the national press corps, Anderson Cooper notwithstanding. Imagine if 70 House conservatives boycotted Barack Obama's Inaugural. Journalists would condemn the entire Republican Party on page one in type the size they used for the bombing of Hiroshima and Nagasaki.

But liberals aren't allowed to condemn a noble man like John Lewis. He is, after all, an icon. And icons get away with things mere mortals, and Republican conservatives, can't.