Why Dr. Seuss Had to Go

Ben Shapiro
|
Posted: Mar 10, 2021 12:05 AM
Share   Tweet
The opinions expressed by columnists are their own and do not necessarily represent the views of Townhall.com. 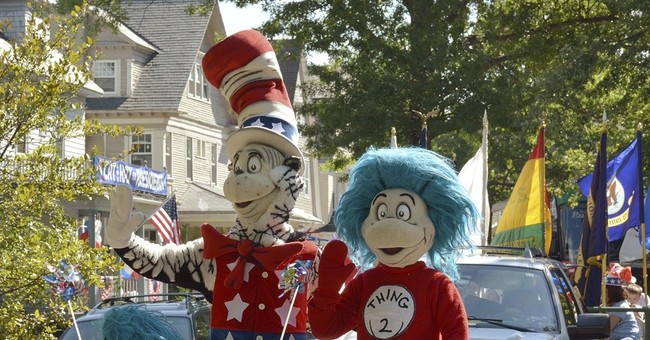 This week, Dr. Seuss Enterprises announced it would stop the sale and distribution of six classic volumes from the great children's author. Those volumes, said the company, violate its commitment to "messages of hope, inspiration, inclusion, and friendship." The books include portrayals of people "in ways that are hurtful and wrong."

Society has long held that activity that damages others ought to be curbed. John Stuart Mill posited the so-called harm principle -- the belief that activity that harms someone ought to be condemned or even barred -- in the mid-19th century. But Mill refused to conflate harm and offense: Being offended wasn't cause for sanction of another.

Broadly speaking, society agreed with this formulation. But in the past few years, this formulation has been completely turned on its head. Now offense is not only considered a harm; it is considered the chief harm in our society. Physical injury, after all, is merely physical. But mental or emotional injury -- that threatens our very sense of identity. Because we find our identity in our own sense of self-creation, any societal denial of that sense threatens our identity. As Carl Trueman writes in "The Rise and Triumph of the Modern Self": "The era of psychological man therefore requires changes in the culture and its institutions, practice, and beliefs that affect everyone. They all need to adapt to reflect a therapeutic mentality that focuses on the psychological well-being of the individual."

When individual self-creation becomes the chief goal of a society, institutions must be torn down -- institutions, after all, foster a set of rules that may not be conducive to individual self-creation. Informational flow must be dammed -- after all, information may allow others to take a different, objectively based opinion about you than you take subjectively about yourself. Books must be burned -- after all, books carry with them implicit messages that may threaten your sense of yourself.

Iconoclasm becomes the order of the day.

Our societal turn from actual, measurable harm toward subjective, psychological harm places us on the road to complete devastation of our culture and our rights. Now anyone who offends -- or even has the potential to offend -- can be, and indeed ought to be, fired. Now any book -- no matter how old or how inoffensive -- can be, and indeed ought to be, banned. Now any kernel of information -- no matter how true -- can be discarded.

This formulation puts all power in the hands of those who are most easily offended -- or at least those who claim to be. The offense itself is the weapon. Legal torts require damages; societal torts merely require a claim of damages, without evidence. No one can explain just how a drawing in "If I Ran the Zoo" has contributed to actual racism; there are no recorded incidents of a single white supremacist citing "And to Think That I Saw It on Mulberry Street" as a formative source in his racist worldview. But any academic with a computer and a degree in postmodern nonsense can take those books off the shelves simply by claiming that offense is possible.

In the end, the only literature allowed will be the literature that adheres to the values of our postmodern world -- a world in which we are not expected to conform to societal rules but society is expected to conform to our own acts of self-definition. That means your child reading "I Am Jazz" but never -- never, Gaia forbid! -- the Bible. It means goodbye to cultural icons, large and small -- goodbye to all vestiges of the past, replete with their "bigoted" value systems.

It means that the purges have only just begun.