Ben Shapiro
|
Posted: Oct 30, 2019 12:01 AM
Share   Tweet
The opinions expressed by columnists are their own and do not necessarily represent the views of Townhall.com. 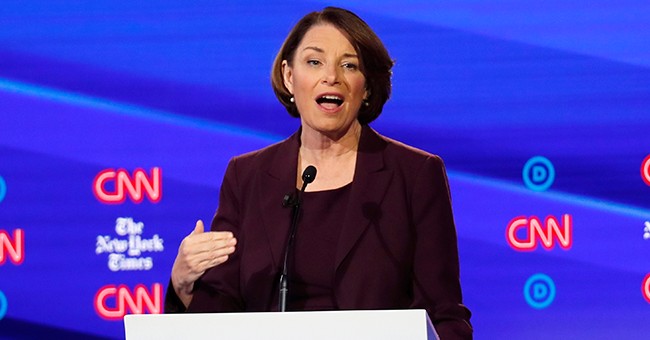 This week, four of the top candidates for the 2020 Democratic presidential nomination -- Pete Buttigieg, Amy Klobuchar, Julian Castro and Bernie Sanders -- gathered at the J Street Conference to explain why the United States ought to pressure the state of Israel to make concessions to terrorists, why the Obama administration was correct to appease the Iranian regime and why American Jews ought to value the opinions of Bernie Sanders over those of Israeli Prime Minister Benjamin Netanyahu on the future of Jewish safety. Two other top Democrats -- Elizabeth Warren and Joe Biden -- sent video messages in support of the group.

By contrast, when the American Israel Public Affairs Committee held its annual conference in March, not a single Democratic presidential candidate showed up. The Democrats are, by and large, simply too ashamed to stand with an actual pro-Israel group, although prominent congressional leaders still show up to mouth nostrums about bipartisan support for Israel.

But the heart of the Democratic Party has moved against Israel. That's because Israel is economically successful, while its enemies are not; Israel is liberal, while its enemies are not; Israel is the tip of the spear of Western civilization in an area known for its tribalism and brutality. This means that according to the radical left, Israel is an exploitative country hell-bent on domination, despite its lack of territorial ambition -- Israel has signed over large swaths of land won through military victory to geopolitical enemies, and offered much more repeatedly.

So the Democrats built up and gave credence to J Street, a Trojan horse group dedicated to undermining American support for Israel and justifying left-wing hatred of the Jewish state. J Street was founded by Clinton operative Jeremy Ben-Ami and Israeli far-left political figure Daniel Levy in late 2007. One of its chief sources of funding -- a source obscured in the early years by its founders -- was anti-Israel radical George Soros.

The media quickly began treating J Street as a legitimate representative of mainstream Jewish opinion on Israel, and so did Democrats, particularly in the anti-Israel Obama administration: Rather than having to deal with those troublesome actually pro-Israel voices at AIPAC, it was easier to bring in a few ringers from J Street to pretend that advocating for negotiations with Hamas represented an acceptable opinion in the pro-Israel community.

And those sorts of positions routinely crop up at J Street. J Street repeatedly urged the Obama administration to abstain from anti-Israel resolutions at the United Nations. Proponents of the anti-Semitic Boycott, Divestment and Sanctions movement have found comfort at their events. J Street was an adamant backer of Barack Obama's Iran deal when the pro-Israel community unanimously opposed it. J Street has refused to condemn a government deal between the Palestinian Authority and Hamas and has even undermined Israeli self-defense in conflicts with Hamas. On campus, J Street regularly hosts groups dedicated to smearing the Israel Defense Forces.

So it was no wonder that Bernie Sanders arrived at the J Street conference and quickly suggested aid to Israel be redirected to the Gaza Strip, run by Hamas, to the cheers of attendees. It was no surprise when Buttigieg suggested that the Iran deal correctly ignored Iran's terrorist funding and ballistic missile testing, while also suggesting that America reconsider aid to Israel if Israel continues to build in disputed areas of Judea and Samaria. It was no shock when Julian Castro pledged to open an embassy in East Jerusalem for the Palestinians -- despite the fact that no solution has been negotiated with regard to the final status of Jerusalem.

Leaders in the Democratic Party may maintain that their anti-Israel turn is due to Benjamin Netanyahu. Those who understand Israeli politics know better. There is wide consensus in Israel that no negotiation can be expected with Hamas, Islamic jihadis or the Palestinian Authority; those negotiations have ended in blood too many times. Absent a peace partner, there can be no peace. Democrats must know this. But they'd prefer to blind themselves to that knowledge -- and use J Street to cover their tracks.