How Presidents Shape Their Administrations

Ben Shapiro
|
Posted: Feb 15, 2017 12:01 AM
Share   Tweet
The opinions expressed by columnists are their own and do not necessarily represent the views of Townhall.com. 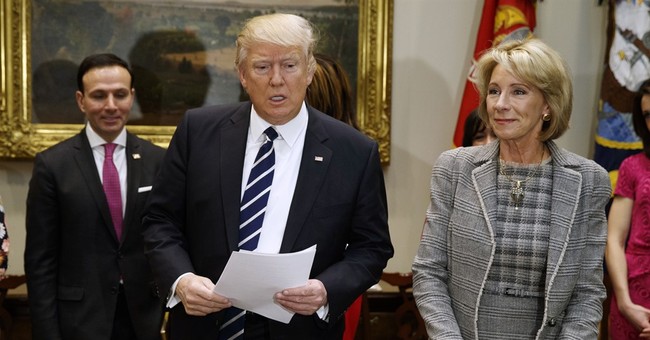 Trending
President Trump, we're told by his greatest advocates, will bring much-needed change. Why not merely ignore his rhetorical failings, his unsurpassed egotism, his confident ignorance? There's a good deal that's tempting about this proposal -- who wouldn't want to separate the wheat from the chaff? I'm personally on board with perhaps three-quarters of Trump's policy implementation thus far in his presidency, even though I'm deeply concerned by his personal shortcomings. So why not just excise the shortcomings from the roll call?

There's one simple reason: Bureaucrats work toward their bosses. That's as true in the case of authoritarians as it is of democratically elected presidents. Those who live lower on the food chain of the executive branch know that their career advancement is dependent on pleasing the boss. This makes forecasting his desires key to self-preservation.

During President Obama's administration, his underlings attempted to do his bidding without waiting for explicit orders. That's why the IRS targeted conservative charities based on his general statements about Citizens United -- they knew what Obama wanted, and they attempted to fulfill his wishes without a smoking gun order.

And indeed, that's what we see from those surrounding President Trump. Rather than hemming him in, they play to him, knowing that if they don't, they're likely to find themselves the recipients of an "Apprentice"-style firing.

Trump is absolutely conspicuous in encouraging such tactics. This week, for example, his senior adviser Kellyanne Conway appeared on national television to slam Nordstrom for its decision to drop Ivanka Trump's fashion line. Conway stated on "Fox & Friends": "Go buy Ivanka's stuff, is what I would tell you. I hate shopping, but I'm going to go get some for myself today. ... I'm going to give it a free commercial here. Go buy it today." After allegations that this violated federal law, the administration released a statement explaining that Conway had been "counseled." Trump then signaled that he was overweeningly happy with Conway.

The following Sunday, Trump's senior policy advisor, Stephen Miller, made the rounds on the news shows that Trump so conspicuously watches. There, he assured the audience in fully Trumpian language that Trump's power would brook no dissent. Glaring into camera with the confidence of Admiral Motti in "Star Wars" bragging about the Death Star, Miller explained, "I think to say that we're in control would be a substantial understatement." He then added, "our opponents, the media and the whole world will soon see as we begin to take further actions, that the powers of the president to protect our country are very substantial and will not be questioned." He bragged that we will once again have "unquestioned military strength beyond anything anybody can imagine." He said Trump has "accomplished more in just a few weeks than many presidents accomplish in an entire administration." This rather purple language made Trump feel just swell -- he tweeted out his congratulations to Miller personally.

Then there was Sean Spicer, Trump's unlucky press secretary, who caved to Trump's ego in the first week and ripped into the media for supposedly underestimating the inauguration crowd size -- a particularly sore spot for Trump, obviously. Spicer's awkwardly overheated appearance led Melissa McCarthy to target him on "Saturday Night Live," to the reported discomfort of the president.

All of this is to say that Trump's personality will shape this administration. And that's not a good thing for policy, since he values loyalty over policy and enthusiastic sycophancy over competence. We can only hope that we get some good policy out of Trump before his insecurities overwhelm his administration. Or we can pray that he finally lets those insecurities go and focuses on governing for the benefit of Americans, rather than assuaging his ego and encouraging others to do the same.