You Have No Right to My Property 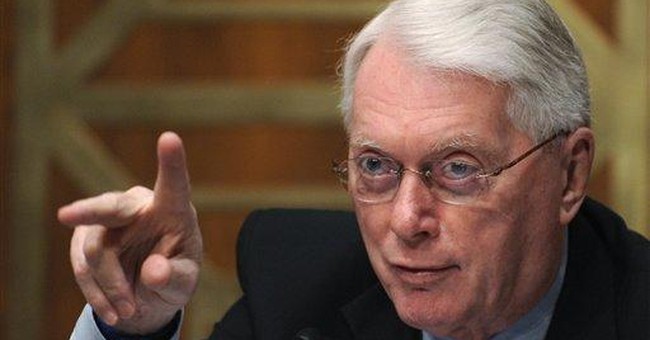 Sen. Jim Bunning (R-Ky.) is the most unpopular man in the Senate, according to his colleagues. "Today we have a clear-cut example to show the American people just what's wrong with Washington, D.C.," said Sen. Patty Murray (D-Wash). "He's hurting the American people," spat Sen. Susan Collins (R-Maine).

What is Bunning doing that deserves such reproof? He has the audacity to stall a 30-day extension of unemployment and COBRA health care benefits on the grounds that the extension would add $10 billion to the federal deficit, which is already expected to hit $1.6 trillion this year. Majority Leader Sen. Harry Reid (D-Nev.) wants to pass that extension unanimously in order to expedite the process; Bunning has refused, correctly pointing out that the Democrats passed a "pay as you go" policy that was supposed to make spending deficit neutral, and that now they're tossing that policy out the window for political convenience. Bunning has even suggested a way to make the extension deficit neutral: Take money out of the unspent chunk of the Obama stimulus package and use it to fund the extension. Democrats have refused.

Here's the truth: Bunning is a hero and his senatorial critics are villains. That goes for Republicans as well as Democrats. Bunning's opponents are liars and hypocrites of the highest order. The Democrats have no intention of lowering the deficit or abiding by "pay-go," and this only proves it. President Obama set up a joke commission supposedly designed to restore fiscal responsibility (he appointed noted spendthrift and Service Employees International Union President Andy Stern), but at the same time, Obama's mouthpiece, Robert Gibbs, is informing the American public that "This is an emergency situation. Hundreds of thousands have been left in the lurch … I don't know how you negotiate the irrational."

But there's something even more insidious going on here than simple political gamesmanship. Too many Americans now believe that the checks they receive every month from the unemployment office -- like the checks they get from the welfare office, from Medicare, from Social Security -- are inalienable rights. They are not.

Our politicians and our press have become too loose with "rights talk." Everything is now a "right." The "right" to work. The "right" to health care. The "right" to a own a home. Each and every one of these "rights" is actually a restriction on liberty.