It's Time to 'Roll Back' Liberalism 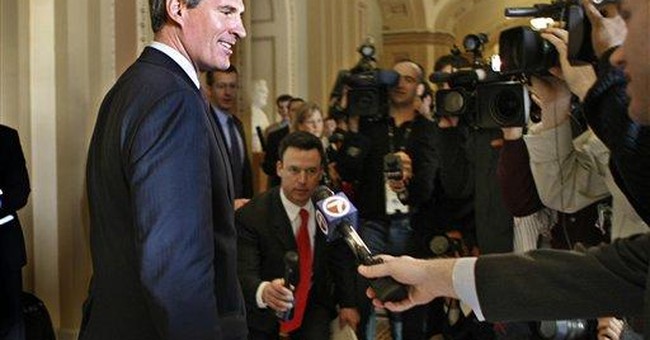 America: the time has come to roll back liberalism.

This was the best week for conservatism in modern memory. On Tuesday, Scott Brown won a tremendous victory for the Republican Party in his Massachusetts Senate race. On Thursday, the Supreme Court handed down a decision more important to the Constitution than any it has handed down in decades.

The case, entitled Citizens United v. Federal Election Commission, dealt with Citizens United's "Hillary: The Movie," a 2008 documentary highly critical of the then-Democratic presidential candidate. The Federal Election Commission saw the documentary as a political advertisement in violation of the McCain-Feingold Bipartisan Campaign Finance Reform Act (BCRA), and shut down Citizen United's publicity efforts. Citizens United sued. And on Thursday, the Supreme Court ruled that corporations no less than individuals have a right to political speech.

The significance of the ruling is clear: It recognizes that freedom of the press and freedom of speech apply to all people, whether or not those people choose to organize legally as a PAC, a 527, a 501(c)(4) or a corporation. The unspoken rationale behind campaign finance reform has always been the equalization of access to political influence; many leftists feel that a poor man's speech is not truly "free" unless it counts as much as a rich man's in the public square. In this view, free speech is a commodity to be parceled out by the government in the name of equality, not an opportunity or a restriction on government interference in political action.

Because this rationale is not palatable to most Americans -- we don't want the government rationing our speech -- the campaign finance reform gurus have cloaked themselves in the guise of "anti-corruption." In Citizens United, however, the Supreme Court came out foursquare against that flimsy facade. "[T]he First Amendment," wrote Justice Anthony Kennedy, surprisingly lucid for once, "does not allow political speech restrictions based on a speaker's corporate identity."

The Citizens United decision demonstrates more than renewed allegiance to free speech principles, however. It demonstrates that perversions of the Constitution are not entrenched forever; Reagan-esque "rollback" is possible, even at the Supreme Court. Citizens United overtly states that the hallowed -- and foolish -- principle of stare decisis cannot be the final word for conservatives.

For too long, liberal legal authorities have hidden behind stare decisis when it suits them (see Roe v. Wade) and rejected it when they see fit (see Lawrence v. Texas). And conservative legal scholars have allowed liberals to get away with it because of the premium conservatives generally place on maintenance of the status quo -- as William F. Buckley famously put it, standing athwart history yelling Stop.

Historically, conservatives have embraced stare decisis on principle; liberals have embraced it without principle. As G.K. Chesterton put it, "The business of progressives is to go on making mistakes. The business of the conservatives is to prevent the mistakes from being corrected." Justice Antonin Scalia seconds Chesterton's motion in practice, stating, "You simply cannot reinvent the wheel in every case … Life is too short. By and large, I am not urging that we rip out all of the mistakes made over the last 50 years."

Now, finally, conservatives are beginning to wake up. As Justice John Roberts, a big believer in stare decisis, puts it in his concurring opinion in Citizens United, "in the unusual circumstance when fidelity to any particular precedent does more to damage [the rule of law] than to advance it, we must be more willing to depart from that precedent." The next step is for conservative justices to begin righting the wrongs that have occurred time after time in the Court's jurisprudence. Scalia's pragmatism isn't good enough. Simply because a bad decision is old does not make it a good decision. Our Constitution did not respect precedent; if it did, we'd be monarchists. It respected certain principles, and those principles must be protected at all costs.

Americans should look at Citizens United and take heart. Not all bad decisions are irreversible, even at the Supreme Court. At the same time, Citizens United should be a cautionary tale for American voters. It took the Supreme Court nearly a decade to dismantle the most egregious encroachment on free speech in our nation's history. We should rely not on them but on ourselves to preserve constitutional principles.

We can roll back the damage liberals have done to our founding principles -- just look at Scott Brown. It's easier to get rid of liberals and to roll back their awful policies electorally than it is to overrule awful Supreme Court decisions stamped with the legitimacy-conferring patina of stare decisis. Roll back starts with us.