Give Thanks for the Troops 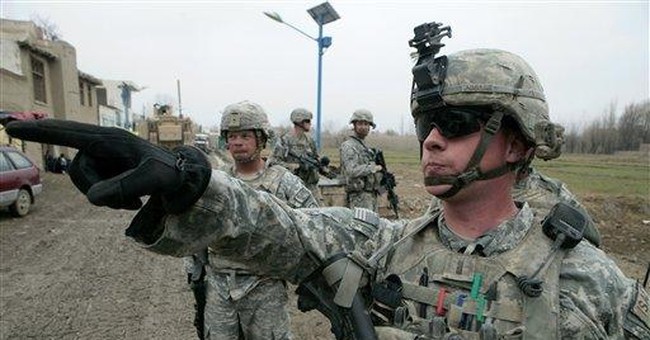 There's a wonderful e-mail going around this time of year. It's like a lot of other e-mails -- it tells a warm and fuzzy story. But this one is different. It's actually true.

It was the first day of school at Robinson High School in Little Rock, Ark., in 2005. Robinson is a smaller public school with just over 500 kids. And virtually every one of those kids thought Martha Cothren, teacher of AP American History, AP Government, military history and coach of the girls basketball team, was crazy.

They thought she was crazy because here it was, the first day, and her classroom was empty. Not empty of kids -- the kids were there. Completely empty of desks and chairs. All the kids were standing around. For the entire day.

Each class period, the kids asked Cothren where their desks were.

"Those are important, but those won't earn you your desk," Cothren replied.

Some of the kids even started offering Cothren bribes. No dice. A buzz ran through the school as more and more kids reported the absence of desks and chairs in their class with Cothren. "What's going on with Cothren?" they wondered.

Five minutes before the bell rang to end that first day of school, they found out.

"All day long," she told her class, "everybody has wondered how you earned your desks." Then Martha Cothren opened the door to the classroom.

And in walked a group of men and women of the United States military. Each one of them carried a desk. They lined them up in rows and then stood at attention around the room.

"You didn't earn your desks," Cothren stated. "They earned it for you."

Cothren's story has made the rounds for the past few years, boosted every Veterans Day. It got an especially large bump when Arkansas Gov. Mike Huckabee mentioned the story in his stump speeches, including his speech at the Republican National Convention.

On Tuesday, I had a chance to talk with Martha Cothren. Her military ties run deep.

"My dad was a World War II POW," she told me. "He was the 24th American captured by the Germans. He was actually thrown out of a plane over Lille, France, after his oxygen mask was shot off; the other soldiers threw him out of the plane to save his life. He spent 42 months in POW camp, Stalag 17B. My high-school sweetheart served in Vietnam. He did make it home, but he was killed in a car accident just before we were to be married."

And Cothren was disturbed by reports from her fellow teachers that students were lazy about standing during the Pledge of Allegiance each morning -- Arkansas state law still requires that the pledge be recited. She knew that the students were guaranteed a free public education. But she also realized that they weren't guaranteed their desks. She took it from there.

"At the end of the day when the veterans came in," she told me, "as they filed in, I had tears pouring down my cheeks. There wasn't a dry eye in the room. And I was so proud of my kids, because they stayed to thank the veterans after the bell rang. Kids congregated in the hallway just so they could thank the veterans. So did the other teachers."

Cothren had called some local television crews to come witness the event. Afterward, one of the photographers asked her to come over and speak with him for a moment. "I need to talk to you," he said. "I'm a Vietnam vet. And I just wanted to tell you that until today, I'd never been welcomed home."

"That made it all worth it," Cothren told me.

She's received her small share of flack. One online commenter suggested that the taxpayers had earned the school desks, a criticism that irked Cothren. "If it weren't for the soldiers, we wouldn't have to worry about paying taxes."

But in general, the support has been overwhelming. The story of the Cothren desks passes from brothers to sisters. She wants to re-enact the scene, she told me -- but only when others have forgotten it, so that it will still have that same impact for the kids.

We can only hope that her message isn't forgotten. We didn't earn our rights -- our men and women of the armed services earn those rights for us. This Thanksgiving, let us give thanks for the people who put their lives on the line to guarantee us those rights. And let us remember, together with Cothren, that same message of thanks each and every day.