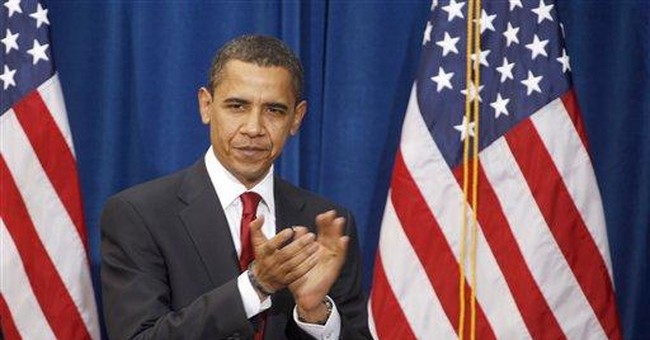 Theres one reason, and one reason only, that President Barack Obamas stimulus passed so swiftly through Congress: Most Americans are worried about their jobs. And Barack Obama promises to save or create four million jobs. Even Obamas most ardent opponents embrace the make jobs programs embedded in the stimulus. Construction projects that put people to work, that fits the bill, Sarah Palin told Greta Van Susteran of Fox News. But these big, huge, expanded social programs thats not right, thats not fair.

Neither Republicans nor Democrats get it. The problem isnt just the pork barrel social welfare spending. Its not merely the redistributionist scheme disguised as tax cuts. The public relations backbone of this bill -- government spending on our nations crumbling infrastructure -- is misguided. While the countrys infrastructure may need revamping, this sort of spending will not stimulate the economy. It will not create the kind of jobs Americans need.

When politicians embrace government make jobs programs, they demonstrate a fundamental misunderstanding of the role of employment in the economy. The goal of a thriving economy isnt full employment -- its raising the standard of living. Employment rate means nothing if the jobs it measures do not create wealth for the economy. During the Great Depression (1930-1940), the United States had an average unemployment rate of almost 18 percent; the USSR, by contrast, had full employment. And yet when the Oscar-nominated movie The Grapes of Wrath, chronicling the Great Depression, premiered in 1941, the USSR banned the movie for the simple reason that the poverty-stricken Joads owned a car -- a luxury virtually no Soviet outside the government enjoyed. Full employment did not breed prosperity.

Heres the magic of private sector jobs. Imagine Bill owns a fruit stand. He sells his fruit for $2 per pound. Herman sees that Bill is doing well, and decides to open a fruit stand of his own. He figures he can undercut Bill and live on less of a profit margin, so he sells his fruit at $1 per pound. Pretty soon, Herman runs Bill out of business. Its tough for Bill. But meanwhile, customers are spending $1 less for their fruit than they were. Theyre spending that extra money at Bobs clothing store, keeping Bob employed -- and Bob can now hire Bill. The bottom line is this: The power of free enterprise creates competition that raises production, lowers prices, and makes lives better for consumers and producers. And thats true even if employment declines in the fruit stand business.

Now lets look at government jobs. Imagine Cool Hand Luke works for the government as a menial laborer. He builds roads in New York. People dont choose to pay Cool Hand Luke -- the government forces them to pay his salary. Now, certain people in New York may benefit from the new road. But they would rather have spent their cash on a new car, or a new computer, or a new business. And the people who live in California, who are also paying Cool Hand Luke, get nothing for their money. Their quality of life is not improved one iota. The bottom line is this: The government can always provide employment, but that employment will not benefit the public nearly as much as a private sector job would.

Americans instinctively understand that quality of life matters far more than employment rate -- and that only valuable jobs increase quality of life. That is why Americans oppose Obamas stimulus package. According to the latest Rasmussen poll, 53 percent of Americans think the stimulus will either fail to stimulate or actually hurt the economy. Unsurprisingly, the only sector of the American economy that overwhelmingly supports the stimulus plan is government employees, by a margin of 49 percent to 24 percent.

And yet our politicians think they can appease us by offering us useless jobs. They think investment bankers will be happy to staff the bureaucracy at the Bureau of Indian Affairs. They believe Americans will be glad to subsidize Caterpillar Inc. employees, rather than putting that cash in their own checking accounts.

Obama might prevent rising unemployment. After all, so did President Jimmy Carter. But hell do so at the cost of private sector employment. Americans will pay the price in standard of living -- but at least they can say they have a job, no matter how useless.