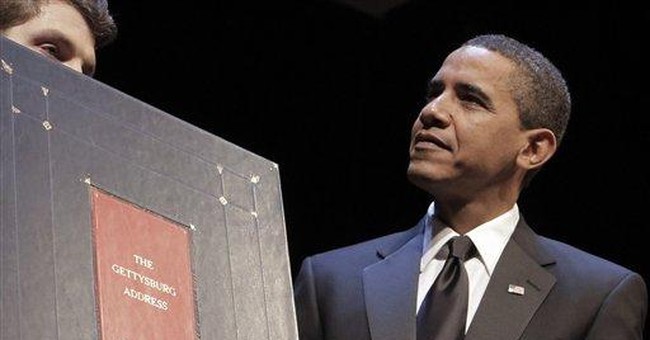 Obamas basic economic philosophy seems to be distrust of private business. He characterizes tax cuts as government spending, as though allowing people to keep their own money were an act of government largesse. And according to Obama, tax cuts arent just government spending -- tax cuts actually helped lead us to the crisis we face right now. Cutting tax rates stifles the economy, in Obamas view. Americans cant handle their money; once the economy stabilizes, Obama states, were going to have to start thinking about how do we operate more prudently.

Americans dont resonate to this sort of thinking. So Obama will simply scare us. Hence Obamas extreme rhetoric. Were not just worried about the economy, were experiencing a collective loss of confidence. Were not merely in a recession, were sink(ing) into a crisis that we may be unable to reverse. Were not simply in an economic downturn, were on the brink of a catastrophe. And Obama and government are the only ones who are thinking about you and your lives.

Theres only one problem: Americans dont believe Obama. So Obama will make his threat a reality by deliberately taking measures that will hurt the economy, all the while blaming private industry and paying off his political allies.

Recovery from this recession will require Americans to spend less and save more; Obamas plan pushes them to spend more and save less. Banks are short on cash because not enough Americans are saving; credit card companies are cutting credit lines because people cant pay their current bills. And yet Obama wants to spend billions on make work projects with the stated goal of getting people spending again. Risky loans and stupid spending caused this crisis -- and Obama is pushing both.

Recovery from this recession will require antiquated businesses to fade away, and new enterprises to take their place; Obamas plan subsidizes bad businesses and penalizes solid businesses. It pays off unions and other political allies. Obamas 15-member Economic Recovery Advisory Board reads like a whos who of the incompetent, the overpaid, and the Obama donors. Its a group of money-leeching companies and union leaders who all pay political fealty to the President.

First, Obamas campaign crew. The Board includes Penny Pritzker, the Obama campaigns National Finance Chair, a woman who was largely responsible for the collapse of the Superior Bank of Chicago -- Pritzker pushed for that bank to invest heavily in subprime mortgages. Mark Gallogly, the founder of Centerbridge Partners, a private equity firm, joins Pritzker on the board -- and yes, hes a former Obama fundraiser. Robert Wolf of UBS is another former Obama fundraiser and another board member.

Then there are the union leaders. Richard Trumka is secretary-treasurer of the AFL-CIO, an organization largely responsible for the collapse of the manufacturing industry in this country. The AFL-CIO is the largest advocate for Obamas card check legislation, which would allow unions to bully nonunionized workers into joining up. And yes, the AFL-CIO spent $53.4 million on the Obama campaign. Anna Burger, secretary-treasurer of the Service Employees International Union, also sits on the board -- and the SEIU spent $85 million in support of the Obama campaign.