Why Israel Will Lose -- Again 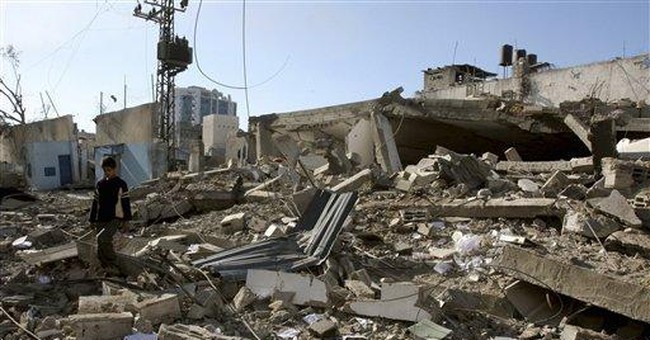 Its deja vu all over again. At least thats how it always feels when Israel undertakes a major operation against the Muslim terror groups that surround it. Whether its Fatah or Force 17 or Hezbollah or Hamas, the story always stays the same. First, Israel appeases its terrorist enemies in order to promote peace. Next, Israels enemies do violence to her. Then Israel responds with sporadic outbursts of tremendous force. In response, the international community caterwauls. Finally, Israel retreats. And the cycle begins again.

Thats how it has always gone for Israel. And thats how it will go this time.

When Israel fails to dislodge Hamas and Israel will fail to do so -- Hamas will claim victory. Israel will go back to the negotiating table and make more concessions. And more of its citizens will die.

Clearly the Palestinian Arabs and their allies, all of whom wish that the gas chambers of Nazi Germany had been big enough to fit all the Jews worldwide, are to blame for the endless violence. The Israel-Arab conflict isnt about faux outrage over borders or supposed anger over refugees. Its about the Arab desire to wipe Israel off the map. The Arabs arent concerned about an independent Palestinian Arab state -- after all, theyve been spending billions on rockets instead of working toilets. When Israel handed over the Gaza Strip, including beautiful Jewish-built greenhouses, the Palestinian Arabs promptly razed the greenhouses and elected Hamas. The Arabs are concerned about killing Jews.

So the Palestinian Arabs arent any mystery. The real mystery is the utterly suicidal nature of the Israeli government.

First, Israel is filled with tired Israelis. After 60 years of unceasing war, Israels population is exhausted. They dont have the willpower to withstand the constant battering of the Europeans and the leftist Americans and the Russians and the Chinese. They want peace, and they want it now. They dont want to see their children drafted and killed in Gaza or in Jenin.

The Israelis are tired. And because they are tired, they have become foolishly optimistic. Things cant get much worse, the Israelis think to themselves. Things have to get better. Maybe this time -- this time -- if we just give until it hurts, theyll stop hating us.

And so they give until it hurts. Until it agonizes. Until it kills. And they wont stop giving until they have nothing left to give.

Second, Israels governmental system promotes centrism. Even if most Israelis found the intestinal fortitude to push for destruction of their enemies, the governmental system would prevent it. Israel, unlike the United States, has a parliamentary government. This means that every elected prime minister must forge a coalition with those across the aisle in order to maintain power. Every Israeli government is a conglomeration of rightists, leftists, and centrists. That is why Kadima, a center-right government led by Ehud Olmert, has hard-left former Labor Prime Minister Ehud Barak as its Minister of Defense. The moment an administration veers too far from the center, the government falls, and new elections are called.

Third, Israel has never decided on a founding philosophy. Israel was originally established as a homeland for the Jewish people -- but such ethnic and cultural sentiments are considered passe by Israeli policymakers. The post-Zionist movement, which accepts Arab nationalism but rejects Jewish nationalism, dominates Israeli intellectual life. And it forces Israel to apologize for its own existence.

Israel need not apologize for its existence. It must remain a proudly Jewish nation. For 2,000 years, Jews were persecuted in other lands. In Israel, they have a refuge. Not only that -- in Israel, Jewish principles can be promoted. And those principles are worth promoting. After all, it is the Judeo-Christian ethic that underlies Western Civilization. It is the Islamist ethic that underlies the murderous, terrorist-sponsoring regimes in the Palestinian territories, Lebanon, Iran, Saudi Arabia, Pakistan, Syria and Egypt.

In order for Israel to win its long fight against its Muslim enemies, Israels population must shake itself off and stand together -- proud, unified, and strong. Israel must stop making excuses for defending herself.

Until then, Israel will continue its losing streak. In a week or two, a cease-fire will be declared. Hamas will celebrate victory. Ehud Olmert will go, and Netanyahu will be elected. And a year or two from now the cycle will repeat. This endless conflict will end only when Israel decides to end it.