MTV: Where Virgins Go To Die 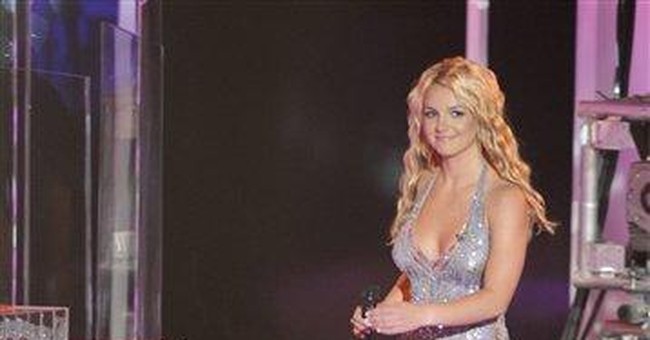 Virginity is hilarious, according to MTV Video Music Awards host Russell Brand. After Brand was done encouraging Americans to vote for Barack Obama because George W. Bush is a "retarded cowboy fellow," he attacked the Jonas Brothers for wearing promise rings, rings intended to demonstrate support for abstinence until marriage.

"I'm beginning to wonder if the Jonas Brothers are quite what they seem," said the freaky-looking, scruffy-haired, tightly-garbed former dope fiend and sex addict. "Because if they were, how come I've got this little ring now?" Brand held up a supposed promise ring. "I mean initially, he was a little reluctant, but eventually he saw it was for the best. And let me tell you, it was an enjoyable and pleasant experience and I wish the rest of the Jonas Brothers the best of luck, because over the course of the evening, I want a collection of these bloody things."

It's always so easy to make fun of teenagers who want to remain abstinent until marriage. They receive the ire of their peers for their scruples. They are pilloried as closet homosexuals, geeks and nerds. It is suggested that they are forfeiting carefree fun in exchange for the drudgery of empty religious standards.

And at the end of the day, those teenagers who do succeed in upholding their standards are, by and large, the happiest people in the world. They don't enter marriage with the baggage of past relationships; they don't get STDs; they don't need abortions or adoptions. They have a lower suicide rate and experience depression less than their peers. They are able to share their first sexual experience with someone they love without fear of abandonment. And they give the greatest gift of all to their spouses -- the gift of their purity, their pre-commitment to the success of their marriage.

It was gratifying, then, when pop star Jordin Sparks, former American Idol winner, stood up to defend abstinence. "I just wanna say, it's not bad to wear a purity ring because not every guy and a girl wants to be a slut, OK?" she said.

Brand was ashamed. He tried to cover that shame with the bravado of the perverse. "'I'd like to take this opportunity to say, no one ever have sex again," he raved. "It's a mad idea. What a way to spend an evening!"

Brand's obscene performance thrilled the critics. "Russell Brand is a bad, bad boy. Thank the punk saints for that!" gushed the Los Angeles Times. "Brand's banter, overflowing with outr political statements juvenile sex jokes and relentless mockery of the well-groomed pop stars surrounding him, was totally, deliriously in the spirit of transgressive rock and roll." "Many commentators," noted Entertainment Weekly, "thought Brand was hilarious and spoke truth to power."

It is past time for parents to turn off MTV. Yet MTV continues to thrive. That continued success highlights our current cultural divide. Religious parents have already turned off MTV; secular parents allow their kids to watch it. There's only one problem: Unless religious parents enter into the public debate, they allow the public square to be dominated by filth. They allow the Russell Brands of the world to win. And while the media celebrates, traditional morality crumbles.