Barack Obama is a Fake 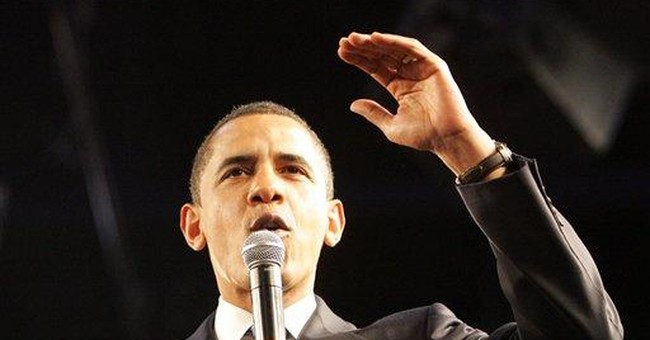 Sen. Barack Obama's star appeal is causing physiological reactions in his supporters. Which is to say, they're fainting.

And these fainting routines are causing me physiological reactions. Which is to say, I'm throwing up.

At no less than six of Obama's recent rallies, fans have reportedly fainted. Those incidents were caught on video or audio. In each, Obama -- who never even thinks to put down the microphone or ask a campaign aide to take care of the matter -- narrates to the crowd as medical volunteers show up to minister to the stricken. In two of the videos, he picks up a bottle of water and offers it to the poor, overcome admirers.

I don't mean to suggest that all this is staged. I'm saying it straight out: It's staged. Obama is supposedly Mr. Authentic -- the man who naturally radiates charisma and magnetic charm. His pheromones are so powerful they strike unwitting audience members into a stupor. He's the Beatles. He's Elvis. More than anything, he's the new JFK, a young, vibrant leader who will lead America into a bright new future.

Obama is as fake as Pamela Anderson's assets -- the only difference between them is that Anderson's boobs have some weight. He's slicker than a Slip 'N Slide. He's more like a pedophilia-free Michael Jackson than a JFK -- he's a sort-of-black, sort-of-white guy made of plastic who lip-synchs empty lyrics to the screaming adoration of juveniles.

Obama is like JFK in one way: JFK was packaged for public consumption, and so is Obama. JFK's father, Joseph -- who doubled as JFK's campaign war chest -- used his personal connections with media members to push his son into the national spotlight as soon as John returned from World War II. John's heroic PT 109 story was printed in The New Yorker, and in 1944, it appeared in Reader's Digest. The ensuing hubbub made JFK a national figure. Life magazine featured Kennedy in 1953, March 1956 and December 1957. The December piece drooled that Kennedy "has left panting politicians and swooning women across a large spread of the U.S." Complained Sen. Hubert Humphrey, "I don't know how he does it. I get into Photoplay and he gets into Life."

Obama, like JFK, is a media creation. He's sponsored no significant legislation during his time in the Senate. He's never run a tough election race. He's flipped his position on Iraq and flipped back. He's never made an important statement in any of his speeches, unless slogans cribbed from "Politics for Dummies" count.

Kennedy did virtually nothing during his time in the House and Senate. His Pulitzer Prize-winning book, "Profiles in Courage," was ghostwritten. But at least by the time JFK ran for president, he'd been a federal-level politician for 14 years. He'd been a war hero. While Obama is just as manufactured as JFK was, he's half as qualified and twice as phony.

JFK never posed as a hard-bitten man of the people -- Obama, who has experienced little to no racism in his life, poses as a champion over discrimination. His first book, "Dreams from My Father," is an ode to victimology, with Obama painting himself as a sensitive straight arrow stuck between two worlds. We're supposed to weep with him when he turns to cocaine because he feels uncomfortable with both the non-blacks and the militant blacks at his privileged high school in Hawaii. We're supposed to sigh when he finds his identity in his African ancestry -- even though he'd never spent a day in Africa until his mid-20s.

JFK never shied away from debating Nixon -- Obama refuses to take on Hillary, knowing he'll be cut to pieces. JFK never plagiarized his talking points -- Obama steals from his buddy, Massachusetts Gov. Deval Patrick. JFK made clear his positions on the issues -- Obama obfuscates, repeating the word "change" as though it were a magical talismanic incantation. Which it is, as far as his empty-headed constituents are concerned.

Obama is inauthentic. His creepily similar responses to the fainting incidents are too identical to be spontaneous. The rash of swooning, star-struck supporters at Obama's speeches smacks of insincerity. Instead of offering his fainting followers water, he ought to be offering them Kool-Aid.

Trending Townhall Video
KJP Tries to Talk Her Way Out of If Biden Deserves Blame for Surging Gas Prices: 'Lot More Nuanced Than That'
Rebecca Downs