Independent of Heaven Itself 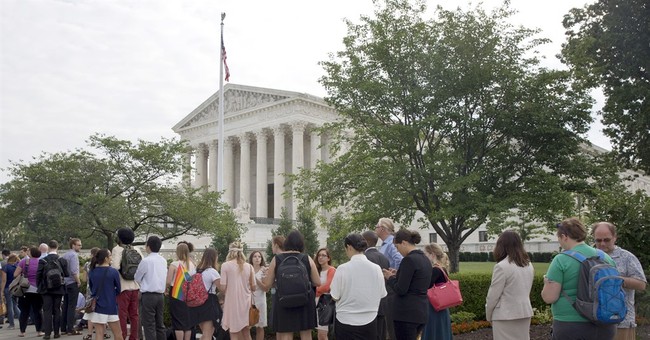 Just in case you might be tempted to optimism amidst the Supreme Court’s current spate of lamentable rulings, please read the following prophecy from Brutus, one of the great anti-Federalists participating in the Constitution’s ratification debates:

"The supreme court under this constitution would be exalted above all other power in the government, and subject to no controul....There is no power above them, to controul any of their decisions. There is no authority that can remove them, and they cannot be controuled by the laws of the legislature. In short, they are independent of the people, of the legislature, and of every power under heaven. Men placed in this situation will generally soon feel themselves independent of heaven itself."

Brutus penned this objection to the Constitution in March of 1788, that is, a little shy of 230 years ago. While we are not certain of Brutus’s real name, with SCOTUS just having absorbed legislative powers by a friendly commandeering of Obamacare and redefining marriage, we can hardly doubt his prophetic powers.

To grasp the real danger to us today, we must remember the actual history of the original constitutional debates: the Anti-Federalists (like Brutus) believed that the Constitution granted too much power to the national government. That’s why they insisted on a Bill of Rights to protect the states and individuals from usurpations by the newly-proposed national government. But none of the First Ten Amendments offers any curbs to the Supreme Court’s power. The 11th Amendment does, but doesn’t address the real concerns expressed by Brutus.

What were his concerns?

First, given the Supreme Court’s appointed role of overseeing the Constitution, it will be compelled (given the very brevity of the Constitution) to interpret it according to both the letter and (more ominously) the “spirit and intention.” Since it is a national judicial body, the Supreme Court “will strongly incline to give it [the Constitution] such a construction as to extend the powers of the general [i.e., national] government, as much as possible, to the diminution, and finally the destruction, of that of the respective states.” To put it in our terms, as a federal branch, SCOTUS will naturally favor the increase of federal power at the expense of the states. (Goodbye state objections to Obamacare; goodbye state laws defining marriage as only between a man and woman.)

Second, given its power of judicial review, the Supreme Court —as it tries to tease out the proper interpretation from the terse and sometimes ambiguous words of the Constitution—will have to forge new principles of interpretation. “These principles, whatever they may be,” warned Brutus, “when they become fixed, by a course of decisions, will be adopted by the legislature, and will be the rule by which they will explain their own powers.” In our more contemporary terms, SCOTUS will conjure up interpretive principles that will thereafter define what the legislative branch dares (and dares not) do. SCOTUS thus lords it over the legislature by the threat of having its laws declared unconstitutional. (Think “right of privacy,” for example, as defining all future legislation about abortion or marriage.)

The result will be an entire usurpation of legislative power by the Supreme Court, precisely because it ultimately defines what is constitutional by its own very particular interpretation of what the Constitution does and doesn’t mean. As Brutus warned, “the judges under this constitution will control the legislature, for the supreme court are authorised in the last report, to determine what is the extent of the powers of the Congress; they are to give the constitution an explanation and there is no power above them to sit aside their judgment.”

To recap, the Supreme Court will interpret Article VI of the Constitution (“This Constitution…shall be the supreme Law of the Land) to mean that the national government trumps all state governments and their laws. But furthermore, since it can declare even national laws as not in accord with its principles of constitutional interpretation, it trumps Congress as well.

Obamacare isn’t Obamacare until the Supreme Court says so. Hence we all wait in breathless anticipation for the decision of 5 out of 9 unelected SCOTUS judges.

And marriage? Once upon a time, marriage was considered, by common sense, to be defined by nature (and nature’s God) as being between one man and one woman. The definition of marriage was considered something not subject to legislative manipulation, an institution not made by human hands, but handed down from heaven through nature.

We come now to Brutus’s third concern: that a body of unelected justices, exercising power over the entire national government, would not remain satisfied with absorbing all political power into itself, but would soon usurp the prerogatives of the deity, and set about defining good and evil from the high court.

And so they have. We must now affirm gay marriage. So we end with the prophetic quote from Brutus with which we began.

"The supreme court under this constitution would be exalted above all other power in the government, and subject to no controul....There is no power above them, to controul any of their decisions. There is no authority that can remove them, and they cannot be controuled by the laws of the legislature. In short, they are independent of the people, of the legislature, and of every power under heaven. Men placed in this situation will generally soon feel themselves independent of heaven itself."