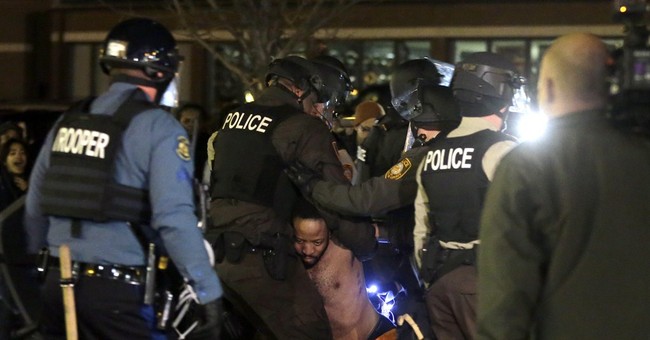 Events in Ferguson, Missouri have spawned an intriguing phenomenon. A casual pursuing of the popular center-left blogosphere like Slate or Salon, replete with its Upper East Side White Guilt, could make black folks wonder, ‘What the hell am I still doing here?’ A quick channel flip past MSNBC would have us believe that African Americans are Public Enemy Number One among militarized police officers wielding the authority of our government to act as if operating under a state of martial law to maintain order.

Were a fraction of these fallacies accurate, a cry from the black community would rise up across the nation: “That’s it, I’m outahere! Packing my bags and going back to my true home on the continent of Africa. I can’t nail down my ancestry but any place has got to be better than this land of White Supremacy.”

Will the liberal media ever tout why we can be thankful for this great country? Is it possible for Black Americans to be grateful for being Americans despite the history of violence and loss of life that has marked the past four centuries in America?

To be fair, there are some curiosities surrounding the Ferguson grand jury decision to not indict officer Darren Wilson in the shooting death of Michael Brown given the fact that grand juries are mostly rubber stamps of the government. Add to this the tragic death of Tamir Rice, shot by a police officer investigating a report of a person waving a gun that was 'probably fake' (according to the caller) in a Cleveland park.

These are but two of the countless injuries visited upon blacks in America. But viewing these events absent any accounting of the tremendous changes over time gives a grossly lopsided presentation of the state of affairs for African Americans today. From slavery to freedom to the civil rights movement and beyond we have continued to make great gains. In spite of racism and injustices past and present, there is no nation on earth that provides more opportunity.

To paraphrase Winston Churchill, American democracy is the worst form of government except for all others that have ever been tried, and we can be grateful for how America has shaped a culture and people who never existed before - the American Black - and how we are responsible for building much of America.

Education is the major vehicle of change and dynamic cultural awareness in any society and American Blacks can be grateful that we are assured the opportunity to attend publicly funded schools from kindergarten through 12th grade. While this closed market system is imperfect, it has produced countless success stories among people of all races.

Opportunity for entrepreneurship is another source of appreciation, particularly for blacks. In a report by the Minority Rights Group International (MRGI) on the state of the African American population, things are looking up for Black Americans interested in owning their own business. The MRGI cites a study by the University of California-Santa Cruz showing that at the turn of the 21st century, African Americans were the only minority/ethnic group to experience increases in new businesses.

Let’s not be Pollyannish; the U.S. Constitution was not designed to help blacks. But the ideas in this document have been the catalyst for unparalleled freedom. Progress has been slow and not even steady for African Americans. Yet despite a long history of hardship and oppression, great people who happen to be black - Ben Carson, Frederick Douglass, Harriet Tubman, Martin Luther King, Jr., Thurgood Marshall, even President Barack Obama - rose above their circumstances. One can agree or disagree with the politics of these men and women but their achievements remain.

People are free to dwell on the tragic circumstances surrounding events in Ferguson, Cleveland or any other American city and allow those events to eat away at them. But in the process, it eats away at their capacity to be full participants in American exceptionalism, resulting in a self-fulfilling prophecy of continued hardship. It’s a cycle that must end.