Is Marriage a Good Thing? 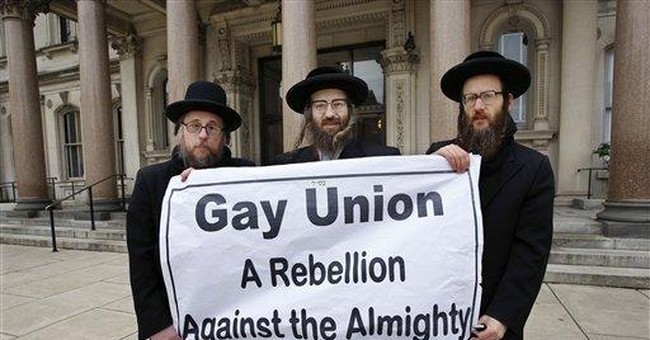 A fundamental assumption of the ongoing debate on the definition of marriage is that it is.  After all, in our ongoing public dialogue over marriage, nearly everyone assumes its benevolent nature.  With advocates fighting over control of the hallowed ground of marriage, in order to change or preserve its scope and definition, one would think that the ultimate prize is a good thing.

But, in a recent article, Professors Laurie Essig and Lynne Owens of Middlebury College pose the question of whether marriage is bad for society.

Before one can analyze the general good, or not, of the institution of marriage, we have to first define what we’re talking about:  marriage, the union of one man and one woman for life.  If marriage is merely, in the words of Essig and Owens, “a structure of rights and privileges for those who least need them and a culture of prestige for those who already have the highest levels of racial, economic, and educational capital,” then I would agree that marriage has not served society well.  Unfortunately, their definition is all too revealing about how we view this hallowed institution and why so many are so willing to question its effect on our society.

What we see today labeled as “marriage” is an institution of sorts, battered and ravaged by infidelity, divorce, and re-definition.  As a society, we have treated this once-cherished institution with reckless disregard, eroding its social significance and reverence.  Adultery services like ashleymadison.com conjoined with our country’s raging divorce industry are but just a couple of examples of this fact.  Looking at today’s version of marriage, it is hardly a wonder that we are having serious discussions about its redefinition.  Society has taken marriage to the brink; is it any wonder that people like Essig and Owens want to give it the final push?

However, the difference between marriage as the professors see it and marriage as it is meant to be lies not only in what it is, but in how we use it.  An umbrella is a fine tool for keeping rain off your head, but if you choose to employ one as a parachute, you’re going to be disappointed (unless your name is Mary Poppins).  The problem is not with the umbrella itself, but with the mistaken ideas about its purpose.  Essig and Owens see how marriage is used and unfairly indict the institution itself.  But when marriage is used merely to satisfy the temporal wants of adults instead of the lifelong needs of children and society, the result is undoubtedly bad.

The true institution of marriage—not today’s war-torn version of it—is a good thing.  The idea of the union of one man and one woman for life is worth saving from society’s bin of unwanted relics.  Notwithstanding our modern-day promotion of marital infidelity, we still admire and cherish fidelity from our family, friends, co-workers, and business partners.  Humans, by our very nature, appreciate, like, and long for loyalty.  When we meet a couple who has been married to each other for 30, 40, or 50 years, we respond with congratulations, admiration, and perhaps even a little envy.  Certainly, nobody sane tells that couple that they’re crazy, or that they’ve missed out on the good things in life.  Indeed, we know that they’ve had the very best life has to offer—a loving marriage that has stood the test of time.

Thus, what Essig and Owens fail to appreciate is the very thing they’re talking about.  The marriage institution that they’re envisioning—one repeatedly compromised by the varying desires of adults—is not what society needs and is certainly not what the government was endorsing when it rightly recognized marriage in civil society from the outset.  The well traveled and proven definition of marriage we need going down the road is far different from what the good professors are proposing to leave in the rear-view mirror.

When creating public policy, we must identify that which is good and only then seek to implement it into the law.  The union of one man and one woman for life is good.  Marriage deserves to be protected in our laws and preserved for the good of society.  Let us not allow the misuse of a great institution to diminish the beauty of marriage itself.