Brazil Woke Up: What Americans Can Learn From The So-Called “Vinegar Revolt” 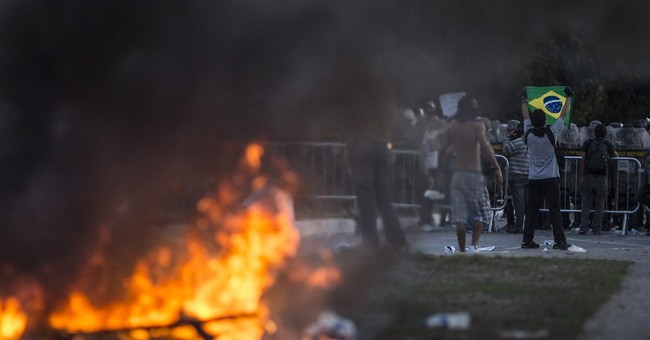 The headlines were telling, but the caption on the protester’s sign said it all: Brazil Woke Up.

Did you see it? It appeared at Drudgereport.Com for a couple of days last week. It linked to a news story that detailed the uprisings which have been nicknamed the “vinegar movement” and the “salad revolt” and that have plagued that entire country for several days.

The protestations have been so named because of a video that recently went viral on YouTube which depicted a journalist named Piero Locatelli being arrested for carrying a bottle of vinegar in his backpack. Protesters theorize that covering ones face with a vinegar soaked cloth helps one to resist teargas, yet law enforcement officers (at least in Brazil) theorize that vinegar can be used to make a bomb (the veracity of either of these theories is, at least in my mind, questionable).

Residents of Sao Paulo were already furious over yet another recent rate hike with their public transportation lines. But then seeing a guy get incarcerated for merely possessing vinegar turned out to be the match that struck the fuse which then ignited the powder keg. So now vinegar is to Brazilians as tea was to Bostonians in 1773.

At the core of the protests lies one important truth: human beings naturally want to live with freedom and dignity. Brazilians are experiencing yet again the tyrannical and undignified consequences of a big, inefficient, and abusive government, and they are perhaps learning all over again that government frequently can’t provide even the most basic of services, let alone fulfill all its promises.

The Brazilians’ story is not unique. It has been repeated throughout the course of history, while slightly different versions of it are playing out right now in Turkey, Spain, Cyprus, Iran, Egypt and Greece. And to a lesser but yet very real degree, it is our story right now in the United States.

Think about it. In America, layers upon layers of dysfunctional and inefficient federal, state and local government consume more and more of our economic resources (and all too often we eagerly agree to hand over those resources), while providing fewer and fewer services. Agents of government frequently enjoy the best employee benefits and retirement pensions at taxpayer expense. Self-gratifying politicians in turn rage against “rich people” and insist that some of our fellow Americans aren’t paying their “fair share” in taxes, while legislatively dodging the very rules and constraints that they place on the electorate.

If that seems overly cynical, think about this: how difficult is it, really, to imagine that the U.S. Department of Homeland Security might one day forbid the public possession of vinegar, claiming that the substance has become a “public safety threat?”

Americans need to develop a healthy dose of skepticism about the promises of politicians to meet our every need, and we should abandon this false assumption that the agents of our government will exercise their power fairly. History suggests that governmental power is usually abused, and America may be on its way to repeating that history.

But here’s the good news: in many other ways, some of the founders of our nation understood human nature so remarkably well that they foresaw a day when future generations would want not so much a President, as a messiah. And some of those same early Americans offered some guidelines that, if we choose again to follow them, could help lead us out of our current malaise.

Such wisdom is yours for the reading in “The Federalist Papers,” that old compilation of some 85 newspaper editorials that argued for the ratification of the U.S. Constitution, published between 1787 and 1788. While making the case for limiting the power of government, and establishing “checks and balances” between government’s various “departments,” James Madison eloquently wrote in “The Federalist Number 51:”

It would seem that Madison the philosopher (who went on to become our Fourth President of the United States) was quite certain that those who govern will never be “angels” (he would probably also concur that a President will never amount to a messiah). Madison also seems to indicate that those who govern will naturally begin to think a bit too highly of themselves, and will have difficulty with ‘self-restraint.”

The good news, even in this brief passage of Madison’s writings, is that “the people” - - those of us who are “the governed” - - can still function as the force that prohibits government from spiraling out of control. Certainly, we are still “free enough” – at least for now, anyway - to speak out, to allow our voices to be heard, and to freely exchange ideas about our country and its government - - even if those ideas are contrary to the edicts of a dead-certain Command-In-Chief.

The question is not “can we,” but “will we” function as that balancing force against a government that has seized way too much control of our lives.

Madison and the other founders set the course. Brazilians are waking up. But will Americans wake up and follow their founders?