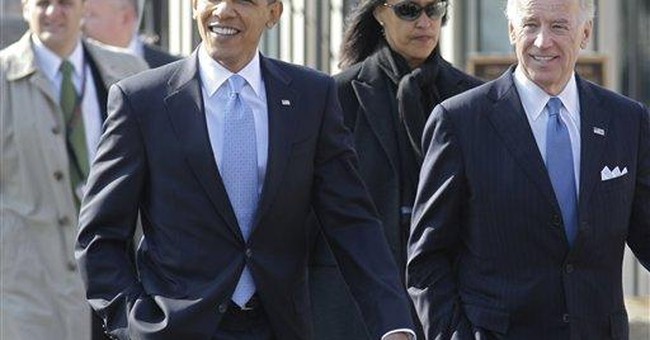 “...Contrary to the claims of some of my critics, and some of the editorial pages, I am an ardent believer in the free market. I believe businesses like yours are the engines of economic growth in this country. You create jobs, you develop new products and cutting-edge technologies, and you create the supply chains that make it possible for small businesses to open their doors…”

Thus did President Barack Obama begin an address last Wednesday to the Business Rountable, the most influential business-based lobbying organization in Washington.

Given that the President has, by his own doing, become a de facto CEO of huge segments of our economy, has hired and fired executives, has imposed salary limitations on corporate leaders, and has spent months claiming to have “saved or created” jobs, it’s likely that there were some skeptics in the audience as he tried to convince the crowd of his respect for the free market. But try, he did, to offer a persuasive argument on this possibility.

And then, less than thirty-six hours later, yet another Obama contradiction popped-up. According to reports Thursday night, the President was considering the use of executive power to essentially “ban” home foreclosures, yet another egregious assault on the very economic system for which he claimed to have oh-so-much respect the day before.

The President’s speech to the Business Roundtable was terrific. And losing one’s home is terrible. Yet when borrowers fail to uphold their debt repayment obligations, private lenders must be free to protect their assets (which is precisely what a mortgage foreclosure is about). To deny lenders this most basic right does a grave injustice to people who have their money invested in banks, and harms our entire economic system.

So why the contradictions from President Obama? Despite his claims about wanting to “create jobs,” his economic policies and proposals seem to have far more to do with consolidating his control over the economy, than they do with growing it. What is causing this tremendous disconnect between his stated objectives, and his actual behavior? And how much longer can the Congress (especially those congressional members who are in the President’s party) continue to ignore Barack Obama’s preferences for control, over growth?

One possible answer to the first question (“why the disconnect?”) is simply that Barack Obama is smarter than everybody else. What appear to the rest of us to be obvious shortfalls and injustices in his economic plans, are not as they appear. We are simply not intelligent enough to understand the greatness of Obamanomics.

This is an idea that the Obama Administration has actually sought to perpetuate. It frequently emerges in discussions about President Obama’s alleged “communication problem” over health care (as in “President Obama hasn’t communicated his healthcare plan clearly”). Yet underlying the concerns about communication is the assumption that Barack Obama’s mind operates on a higher level than everyone else’s, and consequently, we are simply not able to comprehend the greatness of his ideas.

This notion became painfully apparent during a February 19th speech at Harvard University from Obama Senior Adviser Valerie Jarrett. As she fielded questions from the audience, a man took to the microphone and suggested to Ms. Jarrett that many Americans are fearful and rejecting of the President’s ideas simply because they can’t comprehend them (might he have been a “plant?”).

Yet in previous decades, so the man reasoned, the great minds of Bill Gates and Steve Jobs were able to overcome people’s fears and apprehensions of personal computers by writing how-to manuals and brochures, and explaining their high-tech inventions in everyday language. And if President Obama were to write his own how-to manuals and pamphlets that explained his brilliant ideas in terms we could all grasp (think “Understanding Obama For Dummies”), then, the man surmised, we would be more supportive of the President’s agenda.

Ms. Jarrett thanked the man for his recommendation, and assured him that President Obama was searching for ways to communicate better. Yet she also reiterated the theme of superior intellect, explaining that “there is nobody more self- critical than President Obama – part of the burden of being so bright is that he sees his error immediately…”

Of course, those of us who are just so un-enlightened and antiquated in our thinking as to actually still believe in the founding principles of our country, and the virtues of free market economics, are also not content to watch our personal freedoms slip away while we are treated to eloquent speeches from our President and claims of brilliance from his adoring and worshipful inner-circle. We want and need economic growth, and the President is working against us.

Currently, Americans need banks to lend more. Yet if presidential power is used to deny banks the right to secure their own assets when borrowers abandon their obligations, then banks will inevitably want to lend less. And thus we see the beginnings of another Obama contradiction: the President’s effort to control economic outcomes will likely produce the outcome that nobody actually wants.

Why the “disconnect?” And how much longer can the Congress pretend?