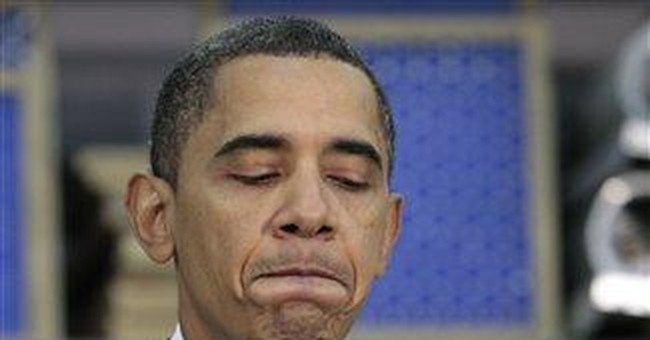 Is there anything President Obama believes he cannot do?

I’m not referring to what his actual capabilities and accomplishments are, but rather, what he believes about himself. There seems to be no limit to his confidence in his ability to make things happen.

In the last year he has undertaken, among other things, the task of running two car companies, persuading the International Olympic Committee to do business in Chicago, “rescuing” Americans who are behind on their mortgage payments, and commanding North Korea and Iran to be nice. Having infused billions of American taxpayer dollars into private companies via his corporate bailout strategy, he now controls huge chunks of the U.S. economy, wielding the power to set executive salaries, determine which products and services are produced, and who gets hired and fired.

And right now there are a few Americans who are stuck on foreign soil, and could benefit from our President who seems to think he can make anybody do anything. Yet President Barack Obama, who spent nearly a year trying to wrestle your personal healthcare matters out of your hands, has now determined that the American Baptist missionaries charged with kidnapping in Haiti are entirely in Haitian hands, and that he can’t do anything about it.

Having supplanted the actual tragedy of the Haitian earthquake in the American media, the story of the 10 American Baptist missionaries stuck in Haiti is now widely known. After being detained for over a week by Haitian law enforcement, the Americans have now been criminally charged with kidnapping, and “criminal association,” for their alleged attempt to transport 33 Haitian children into the Dominican Republic without permission from the Haitian government.

While the actual “facts” of this case have not been officially determined, on the surface it would appear that the American missionaries behaved recklessly, transporting a group of children across international borders without approval from governmental authorities. Naively, the missionaries have reportedly indicated that they believed what they were doing was okay, because a Pastor in Haiti had allegedly approved of their plans.

To make matters worse for these Americans, the woman who is said to have been the “leader” of their group – 40-year old Laura Silsby of Meridian (suburban Boise), Idaho, apparently has legal troubles in her hometown. According to a detailed report that appeared in the Idaho Statesman newspaper last week, Ms. Silsby is a business owner who has been the subject of eight civil lawsuits and fourteen unpaid wage claims. Since 1997, she has been the subject of nine traffic citations, including four for failing to provide insurance on her vehicle and/or failure to register her vehicle. A jury trial involving one of Ms. Silsby’s lawsuits is scheduled to get underway in an Idaho District Court later this month.

So a small group of Americans travel with their church to an impoverished country to “help” suffering children, and end-up facing criminal charges. And their problems may be entirely of their own making. Yet, they are nonetheless Americans, and they are deserving of their government’s assistance.

As such, the reality that these ten people were charged in a Haitian court last Thursday with absolutely no legal representation present with them, should be disturbing to all Americans. Employees of American Embassy’s abroad are usually quick to assure Americans visiting other countries that, should any trouble arise for them on foreign soil, their government is ready to intervene on their behalf. And now that this incident has risen to the level of the U.S. Department of State, it is reasonable to think that the Obama Administration could and should arrange for the missionaries’ safe return home to the U.S., even if the missionaries must return to Haiti at a later date for a court trial.

But the Obama Administration has chosen to remain “hands-off” with these American Baptists. “This will be a judgment based by the Haitian government on Haitian law,” State Department Spokesperson P.J. Crowley told USA Today. “If Haiti decides to consult with the United States in terms of other legal avenues, obviously, there are legal procedures for us to do that…”

Our President has commanded over 17,000 military personnel into Haiti. He has also pledged over $400 million of our money in “relief aid.” He has mobilized two of our former Presidents to raise money for Haitian relief efforts, and earlier last year dispatched former President Clinton to the hostile nation of North Korea to secure the release of Americans detained there.

We have now found something that President Obama apparently believes he cannot do. But why does he believe this way?